About the Artist Kerry Darlington

View All Art Works By Kerry Darlington
With an apparent fixation with nature, and trees in particular featuring prominently in her most popular works of contemporary art, Welsh painter Kerry Darlington has carved out an enviable reputation on the back of her hugely original, intricately decorative and mesmerizingly evocative designs, which has seen demand for her collections rocket in a relatively short space of time.

Darlington is native of the picturesque North Wales coastal town of Rhyl, where the Welsh artist was born in 1974. Her young head was turned by the stunning picture book illustrations that peppered the pages of some of the finest childrens fictional work down the years, and ones that are of course household names to the rest of us.

Peter Pan, Alice in Wonderland, The Magic Faraway Tree and The Wizard of Oz just for starters, has seen generations of kids and adults alike identify with. At roughly the same time as falling in love with the works of J.M Barrie and Enid Blyton, Darlington was also being creatively enlightened by the presence of Rackham, Dulac and Beardsleys finest illustrative hours, whilst a few years down the line, Darlington was being exposed for the first time to the art of the Pre-Raphaelites and leading exponents of the Art Nouveau movement.

All this inspiration was absorbed like a sponge by Darlington, and formed the intentions of studying art on leaving school. This manifested itself as a Degree in Illustration in 1996, which Darlington had originally viewed as a conduit to a career in book illustration, however after graduating from university an employment opportunity arose for Darlington in South America, which she took up, before returning to the UK to assume the position of Designer and Illustrator for a luxury goods company that specialized in sculpting bespoke clay murals who exported these unique creations to private buyers in America, the Middle East and the United Arab Emirates.

After that particular employment chapter in her life came to a close, Darlington took the brave step of dedicating all of her time to the pursuit of a professional career in contemporary art. Drawing on all of her influences of youth and an adaptability to create art in a variety of subjects, gave Darlington a great platform from which to launch her independent business from, and has worked from her studio in North Wales to date.

Whilst Darlington now works in a variety of artistic mediums, including acrylic, oils and predominantly watercolours, this wasnt always the case, as prior to this she concentrated her efforts solely in pen and ink. Yet that way she established and perfected her drawing skills before elaborating with alternate materials. Darlingtons experiences with clay murals also drove her to experiment with what effects paint had when introduced to heavy textures, with a view to producing original surfaces.

Trees and fictitious fantasy scenarios aside, some of Darlingtons early abstract pieces were initially based on satellite photos of the Earth, which transpired as her Volcanic collection as of 2005/06. But in spite of her supposed signature works, its almost impossible to stereotype Darlingtons house style, as shes also diversified to incorporate both contemporary landscapes and figurative studies, if not supporting her hallmark flourishes somewhere within the composition as this evolution takes is played out on her canvases.

Darlingtons work has brought her to the attention of art lovers and collector near and far, and has become one of the best-selling contemporary artists in the UK, with her collections filling much gallery space to boot. In terms of recognition in the industry, in 2007 Darlington was a finalist in the 'Best Up-and-Coming Published Artist' category in the Fine Art Trade Guild Awards, as voted by UK Galleries, while most recently she gained the title of Best-selling Published Artist Award 2012 by the same celebratory body. 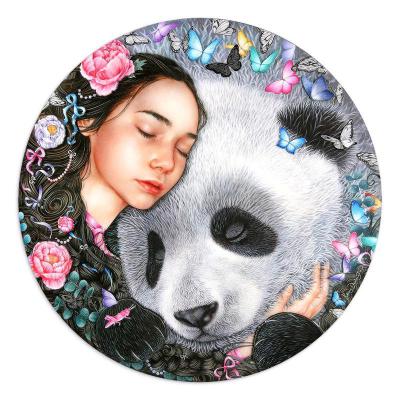 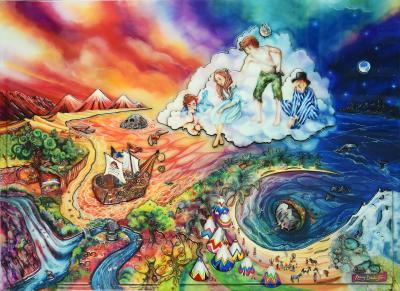