About the Artist Cecil Rice

View All Art Works By Cecil Rice
The presence of water plays a pivotal role in acclaimed contemporary landscape artist, Cecil Rices signature compositions, as his impressive back catalogue attests to, and admits its draw is far too greater a one to ignore. Explaining the hugely popular artists illustrative fascination with some of the most evocative spreads of waterways in the world, with particular emphasis placed on the iconic canals of Venice in Italy. Its more than possible that Rice inherited his sense of creativity from his father, Sean, who himself is an established and accomplished sculptor, and obviously encouraged his son at every turn once he showed initial signs of artistic talent.

Rice Jnrs fledgling interest in the discipline was increased tenfold after being exposed to the enigmatic sights of Italy, and the Tuscany area specifically where the Rice family would holiday in the summer, and from there explore the locality and further a field, as far as Venice.

Rice was transfixed by the romance of the famous floating city, exemplified by its architecture and general ambience, and since turning professional as a fine artist has gained a reputation for his own romantic and colourful visual representations of Italy, and Venice in the illustrative extreme. Once hed completed his secondary education, Rice attended Brighton Art College, from where he graduated in 1983, and during the period thereafter he divided his time between growing, developing and evolving his own, personal painting and teaching of the subject to others. Yet the lure of painting full-time was too much for Rice who gave up his teaching job and announced himself in the capacity of a finer artist as of 1997.

Rices first taste of professional artistic acknowledgement and subsequent success came on the back of exhibiting his (then) works at the Battersea Arts Fair, which served as the perfect platform from which to launch his professional painting career. This outlet brought Rices compositional style to the attention of galleries and collectors alike, who were suitably impressed with what they saw and as a direct result demand for his work burgeoned. To date, Rice has had his art work showcased in some of Londons most prestigious art galleries and publicly-accessible venues, as well as at selected location in Brighton, not to mention enjoying exposure in Tokyo and Nagoya in more recent history.

In terms of artistic inspirations, Rice mentions the leading exponents of The Norwich School, where he believes both J.S Cotman, Pierre Bonnard and Emil Nolde both influenced his own pictorial directions, alongside of readily identifying his own fathers creativity as being equally as key to his passion for art per se. returning to the former examples, and Rice recounts a visit to The Castle Museum in Norwich where he first saw the works of The Norwich School, which again excited and motivated him at an early juncture. Speaking of Nolde, Rice comments that the Intensity of his colour and a fluid vitality is glorious. He also cites Turner amongst his painting heroes and waxes lyrical about the famous artists own compositions based on Venice, and explains that he returns to The Clore Gallery at Tate Britain quite regularly to admire Turners paintings. On this note, Rice adds; They are simply sublime, they are at once inspirational but quite awesome too.

Unsurprisingly perhaps, but travel also fans the flames of creativity in Rices psyche too, and as far as stimulation goes he lists Florence, Rome and Pisa on a level par with Venice for his Italian sojourns. Aside from these Mediterranean locations, and Rice speaks of trips to the River Nile in Egypt and North Africa in general, whilst the coastal splendour of a place far closer to home, namely his now native Sussex, all figurer prominently in his favoured landscapes in which to commit to canvas. Light is the most important aspect and graphical element in Rices compositions according to the artist himself, who insists; Im attracted by how the brightest light in a painting gives way to the deepest of shadows. This range of contrast in a watercolour imparts a kind of strength and satisfies the eye, before adding; Colour of course is another entity and sometimes, even without much tonal contrast, can be arranged so as to have a luminosity of its own. 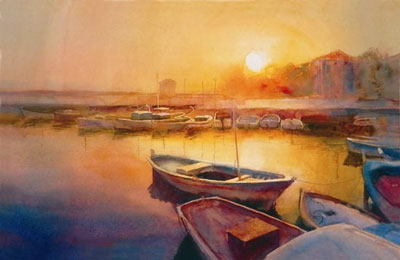 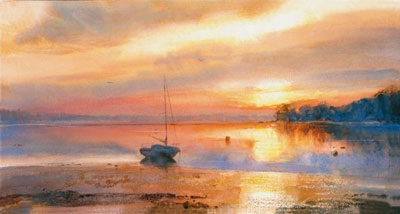 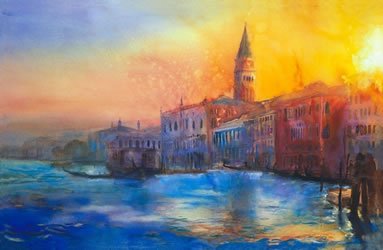