About the Artist Sherree Valentine Daines

View All Art Works By Sherree Valentine Daines
Vibrantly colourful impressionist paintings are Sherree Valentine-Daines stock trade within the art world, and on which shes built an enviable and formidable reputation in the production of, with the figurative artist also having completed candid portrait works for some of the most recognisable faces in popular culture and society. From stars of screen and stage to sporting icons, Valentine-Daines has captured the painted essence of a collection of household names and instantly recognizable faces, from Joanna Lumley, Michael Parkinson and John Sessions to rugby world cup winners, Martin Johnson and Jonny Wilkinson amongst others.

And thats not to mention Valentine-Daines almost painting by Royal appointment, on account of her receiving the royal seal of approval from members of the Royal family who number amongst her world-wide clientele.

Its all a long way from Effingham in Surrey, where Valentine-Daines was born and raised in 1956, and she may never have been an artist at all, as her younger years testify. As an 18-year old making her way in the world, Valentine-Daines secured employment in London; with her first role of a legal secretary. With a penchant for doodling on her legal pads when time allowed, it soon became abundantly clear that Valentine-Daines was, for want of a better word, seemingly wasting her time (and obvious artistic talents) following a legal career path, and instead was coerced into higher education. Enrolling at Epsom School of Art, Valentine-Daines graduated from her 4-year course in 1980, and almost immediately on leaving relocated to Cornwall; where she spent the entire summer painting vistas of villages, harbours, beaches and most notably, people.

This stemmed from her last years at art school whereby she developed a keen interest in figurative painting. Although not to be typecast or creatively pigeon-holed as such, Valentine-Daines is also widely acknowledged for her capturing of Londons busy thoroughfares, particularly in the committence of the everyday sceneology of passers-by observed in the act of hailing cabs, perusing street markets or exiting many of the capitals theatres in the aftermath of one production or another. Sherree preferred to use oil on canvas as she finds this to be the purest and most painterly medium available to her, and has continued to rely on this material over the years.
As soon as Valentine-Daines graduated she set about persuading local institutions to exhibit her work and her success was immediate. In light of this, she soon came to the notice of the art world and won a number of accolades including the Young Artist of the Year Award from the Royal Society.

Valentine-Daines has of late had published a couple of stunning self-illustrated hardback books; First Impressions and Your Days, My Days. The former title retrospectively chronicles her life and career, whilst her work and collections continue to be regularly exhibited at such luminary venues as The Royal Academy, The Barbican and Lords Museum to name but three. Valentine-Daines has also worked on a TV series with Laurence Llewellyn-Bowen, appeared on ITV on Fern Brittons final This Morning programme - presenting the superstar broadcaster with a portrait commissioned by her colleagues - and has been dubbed artist to the stars by the national press. Valentine-Daines collective works have also been both celebrated and honoured by The Royal Society of British Artists, The Olympic Games Exhibition, The Royal Institute of Artists, the Royal Society of Oil Painters, the Laing Landscape Exhibition, the Royal Institute of Painters in Watercolours, the Royal Watercolour Society, the Hesketh Hubbard Art Society, the New English Art Club, the National Society of Painters, the Pastel Society and the Tate Gallery amongst others 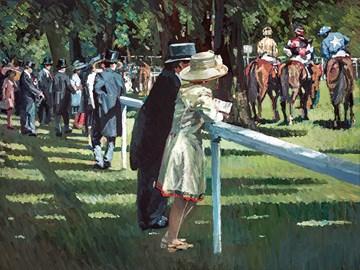 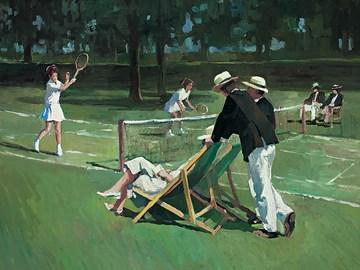 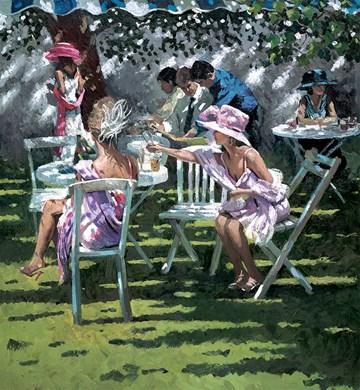 Champagne in the shadow