About the Artist Richard Blunt

View All Art Works By Richard Blunt
As was the case with any child of the 1980s (and obviously pre-1980s and pre-anything that resembled a decent computer game console and/or multimedia centre), figurative artist, Richard Blunt spent vast chunks of his childhood outdoors, climbing trees, riding bikes and grazing his knees like any self-respecting yoof of the day. However whenever rain stopped play, and on his forays back inside, Blunt would entertain himself with the arts. Initially drawing and painting, followed in his adolescence by the onset of guitar-playing and pseudo band-forming. Blunt was born and reared in Stourbridge in the West Midlands and led what he himself refers to as a happy, but not necessarily eventful formative years. After secondary school, Blunt enrolled on a 3D Design course at art college, and despite enjoying his time there became restless and bored.

This distraction led to eventually dropping-out of higher education earlier than planned, and instead Blunt turned his attentions to his other creative love forged during his youth, that of music.

After several years spent on the road, gigging with a collection of different bands, Blunt realised that this wasnt his chosen path and wouldnt get him where he wanted to be in life. But he hadnt automatically decided what course of action would for that matter. Appreciating that he must head back to education if he were to make something of himself, Blunt couldnt pick between the study of art or music. Right up until the time he settled on the latter option. Obviously this didnt go quite according to script, otherwise Richard Blunts artist profile wouldnt exist and therefore you wouldnt be reading this, instead a Richard Blunt, musician biography would have popped up somewhere else down the line.

As it was Blunt changed tack whilst on his music course, yet didnt jump ship mid-way as previously, rather opting to complete his BA (Hons) degree course this time around. It was whilst there though, that Blunt was inspired by oil painting, chanced his arm and therein got hooked by it. Before long he was being approached by friends and family to have their portrait painted, as paid commission, which effectively were helping fund Blunts way through his music course. So all was good in his immediate world at this juncture. Seeking influence from the likes of Vermeer, John William Waterhouse and moreover, Caravaggio (and in whose signature works hes had comparisons drawn), Blunt expanded his painted horizons and chose not to just dwell on his burgeoning portraiture portfolio, and experimented with the creation of some original composition work. To Blunts surprise, these turned out better than hed first envisaged, and on the back of this managed to sell the majority of them. Blunt speaks of the inspired manner in which they adopted and adapted light and realism to such devastating, yet structured effect in many of their studies, and ultimately how these techniques afforded the finished pieces this seeming cinematographic still look and feel; as if lifted straight from a modern movie.

Its courtesy of Blunts love of film and music thats provided him with the raw material to project and convey the mediums that he feels comfortable with from an artistic perspective, with much of his initial work completed as a professional artist being reliant on the depiction of musicians or for that matter, scenes lifted directly from movies. To this very day Blunt admits to launching himself at the TV remote control should he witness a particular scene during a movie that moves him enough to hit the pause button and sketch out what he sees there and then. Blunts particular forte and wherein where his passion lies with direct reference to the big screen is the classic flicks of the 1930s, 40s and 50s; the heyday of enduringly romantic stories told on the biggest stage of them all. This period is noted without distraction in his most familiar works, and as a sub-genre Blunt talks much of his fascination with Godfather-type crime dramas. And characters set against a moving background of sadness and loneliness.

From this stemmed Blunts paintings of a lone male figure, constantly searching for something, and always clad in his best bib and tucker that epitomised the yesteryear qualities that the artist adhered to through his compositions. Be-suited, an overcoat flung casually over one arm, a trilby or fedora worn atop his head, this mysterious subject matter told a perpetually unfolding story, much in the same vein as a novel, song or film itself would seek to do with a relentless regularity. Of course, hes resigned to the fact that a book, movie or song has the luxury of time in relation to the storys foundations being laid, the gathering of momentum and the culmination of the story, whilst a painting must submit every chapter and verse in the singular image; an immediate snap shot. To Blunts mind, his pieces must possess enough mystery to ensure that the viewer stops long enough to question the character, the setting and the interplay between the two, as well as attempting to grasp the un-painted full story.

Over the past few years Blunt has sold his body of work both privately and through UK galleries, and as a result of his collaboration with the UKs leading art publishers, Washington Green who he struck up a successful working relationship with, and in which has allowed Blunt to develop and evolve the personal style and technique that we see today. 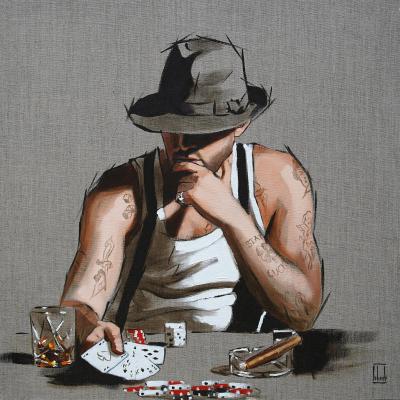 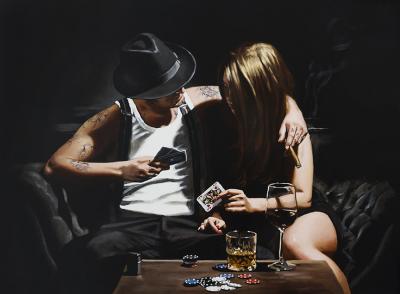