About the Artist George Somerville

View All Art Works By George Somerville
Men. Working men. Working men at play. Men returning from work, their shift finished. Men walking their dogs, and making haste on the bicycles. Men giving a car the once over. Men walking here, there and everywhere. Men mingling/socialising with other working/off duty working men. Men occasionally seen with their wives. A brief summary of many a hallmark George Somerville composition, although not illustratively justifying quite as we should. Yet historically these are the core subject matter/scenarios painted out by one of the UKs leading contemporary fine artists  specialising in both figurative and town/landscapes  George Somerville. With more than a subtle hint of the industrial and community togetherness that singles an L.S Lowry piece out, theres a distinct northern charm and underplayed sophistication about a typical Somerville study, complimented by the normally aspired wit and personable nature of the key characters who make the painting what it is.

Somervilles achingly nostalgic subject matter was borne out of an inherent desire to visualise the vivid memories of his Glaswegian childhood. A Glaswegian childhood which was lived out during the industrial 1950s. Somerville strives to reimagine the places and the people which and who shaped his youth and formative years, despite the very vistas of foundries, factories and steel works having been long gone and forever disappeared from this urban landscape. That said, as Somervilles work evolved and developed further, he couldnt help but notice that this spoken about heavy industrial backdrop had become less important to the overall composition, and that essentially the characters had emerged more prominently. In Somervilles most recent collections, theres a very clear lead muse now, as these illustrative personalities have come to the fore at the expense of the hitherto industrial reference points.

Returning to Somervilles youth though, and when he was born in Glasgow in 1947, he was born into a city that conveyed a great and powerful atmosphere during this period. Bustling streets, coupled with a vim and vigour to its citizens and residents, which engendered this all-pervading, steely sense of community. Somervilles father was employed in one such foundry, and Somerville recalls that money was thin on the ground whilst he was growing up. but thats not to say that he wasnt provided for, and any materialistic shortfalls were more than compensated for by way of a comfortable, tight, yet happy family unit working as one.

Somervilles artist attributes were recognised by others from an early age, however the expense incurred by attending art college was a bridge too far for Somerville and his family to even consider in light of the rest of the family needed support too at this time. Yet this wasnt the end of the matter, as a couple of years down the line Somerville did find himself in a position to attend art college, which he successfully did between 1965 and 1969 at the Glasgow School of Art. After graduating in the late 1960s Somerville decided to enter the world of commercial art and ended up securing roles as an Illustrator in a succession of city advertising agencies, which he focused on for many years. Turning from full-time employee to freelancer, Somerville finally turned his back on commerce and turned professional later in life. Although his personal art had never left him as all the time Somerville had been plugging away, painting for pleasure well into his adulthood, and eventually forged the opportunity to present some of his artistic back catalogue in a raft of Scottish galleries.

When pressed on his particular style, Somerville insists that its a very spontaneous one, and that rather like his creative career up until the point he started to make a name for himself, was similarly haphazard and uncoordinated as such. Once a subject presents itself to Somerville, he describes how he readily lays down the paint to the canvas in something akin to a frenzy of activity, conducted in a decidedly bold linear style for the most part. In terms of his inspirations, aside from the subject matter which as outlined above comes courtesy of his youthful memories, Somerville cites the classic comics and graphic novels hed pore over fastidiously as a child.

Having never strayed far from his native Glasgow during his working life, Somerville today retires to his studio when he needs to get away from it all and paint, which is situated in a small fishing village found on Scotlands east coast. Whilst Somerville himself may not have travelled that far away from home, his reputation and work on the other hand is well-journeyed, as testified to by the knowledge that his work is exhibited in numerous private and corporate collections from the South of France to the most northern reaches of Canada. 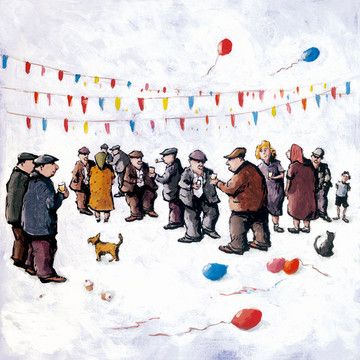