About the Artist Jennine Parker

View All Art Works By Jennine Parker
Acclaimed contemporary sculpture and fine artist, Jennine Parkers signature work conveys a depth of passion for the origination and subsequent deployment of fluid, transient movement, as well as securing a firm eye on shape and texture simultaneously; whether shes concentrating on the manifestation of her unique two-dimensional, ceramic, sculpture or jewellery creations. The common design theme and thread running through her portfolio is that of the female form in all of its eventualities, which Parker imaginatively evokes through her considered and illustratively cultured considerations for curves and shapes.

Most of which is forged and artistically evolved courtesy of inspired life and times going on around her.

Parker has a definite thing for the prevalence of textured surface areas in her work, and is heavily influenced and guided by what she refers to as natural weathered erosion; which to Parker creates this contrast of one minute smooth, the next, textured surfaces, which in itself serves to establish further degrees and welcome layers of perceived sensitivity to both texture and form. On this subject Parker adds; Interesting shapes and lines are naturally created from every angle, feeling the need to hold or touch the sculpture is my deliberate intention.

In terms of the logistics of her sculptures, Parker brings them to life by the frequenting of an oil-based modelling clay first and foremost, which she deliberately uses to embellish this crucial textured effect. However next Parker forges another, almost living aspect to the formulating piece by the introduction of additional debris, be it bricks and pebbles and such like to engender this all-important sense of depth and tangible volume to the finished article.

Parkers creative journey began in the graphic design industry some two decades earlier, where her 9  5 essentially revolved around corporate ID and branded literate design for the man; before she eventually arrived at the decision to fly solo. Setting up her own design company in 2001, Parker wanted to place more emphasis on her art and sculpture, yet has never strayed far from her commercial design heritage which she still believes gave her the ideal grounding for what she does now. Indeed, its clear to see that Parker habitually incorporates her graphic design skills into her artwork, layering her original abstract paintings with, fabrics, photography colour and texture for the most part.

Yet Parkers passion and yearning always lay in the discipline of clay and the sculpting of this pliable and malleable medium, and being a published sculptor enables her to have her work cast in bronze and showcased in galleries across the UK and further afield in recent years. Parker is incredibly proud of what she now does on a daily basis and which has become her new career, and something which fully embraces and justifies her inherent passion. Parker herself sums it up best by commenting; Being creative gives me an immense feeling of satisfaction, to start with nothing and create an interesting form that can bring texture, shape and colour into someones life is phenomenally exciting; going on to say; I see shapes in everything around me, from patterns in knotted wood to the shapes and shadows created by random objects. 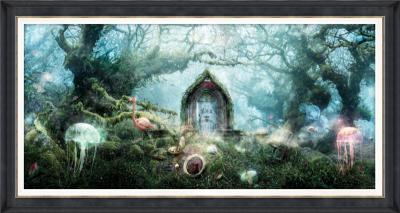