About the Artist Caroline Shotton

View All Art Works By Caroline Shotton
Established British artist Caroline Shotton creates whimsical, irreverent pieces positively rammed with extra helpings of delicious humour, yet simultaneously laced with sophisticated overtones of impressionism and surrealism; which hit the contemporary artistic spot, time after time and are as quintessentially British as they come. For quintessentially British read, quirky, bordering on eccentric, laced with irony and other departments of mirth. And her predominant subject matter? The visual text thats made Shotton a headline act on the UKs a la mode art scene? Cows. Or bovines to afford them their correct, agricultural terminology.

Shotton is what is colloquially known as a humour artist, should the hugely successful craftswoman require a label, and has forged a reputation on her interpretations of, and wait for it, cows. And more pertinently, cows depicted in the context of popular culture, historical figures and fictitious characters. The Cow with the Pearl Earring, Vincent Van Moo, Have I Got Moos For You and Diamonds are for Heifers in but a single sentence constructing a mental image of Shottons wicked sense of humour and grasp of abstract art translated for a new audience.

Of course, retrospectively the positioning of the ruminant mammal of the genus Bos (or cow to you and us) hasnt been exactly cover or centrefold in terms of depictions in popular culture. There was the one that, according to the nursery rhyme, circumnavigated the moon for no good reason, and Ermintrude (the downbeat pink spotted cow from 1970s childrens TV programme, The Magic Roundabout for those of a certain vintage). And thats your lot. Undeterred by this noted absence, Shotton set about inventing her own, bespoke cow characters to fill the gaps. And ultimately create an entire new genre and market. A niche market (some would say) that Shotton has got well and truly licked.

Shotton was born and bred outside of London, and was brought up by her grandmother, in whom she owes a debt of gratitude. Not least, for her active encouragement of her grand-daughter to nurture and develop her obvious artistic talents from an early age. As well as drawing inspiration from the countryside and the creatures that populated it on the outskirts of the UKs capital city, a young Shotton would regularly travel into the big smoke and visit its famous art galleries; where shed gravitate towards the works of the old masters themselves. Shotton is said to have been taken by the clarity and realism indicative of their works.

Winning a place at the well-respected Central Saint Martins School of Art, it didnt take Shotton long to immerse herself in a phalanx of artistic movements, and especially ones that were renown to push boundaries and peoples perceptions of just what art symbolises. Surrealism, Dadaism and Impressionism being just three new discoveries to an eager to learn Shotton. It was this awareness and creative awakening that led to Shottons cow themed studies, and the belief that humour had a place in art and that the perception of art itself, was very much in the eye of the beholder. Shotton herself adds; I've always created work that stems from personal experience, yet allows others to add their own narrative.

After graduating, Shotton had a stint as a freelance artist, before taking the leap of faith and setting up herself in her own gallery; the rest of which is history, as her works of humourous, contemporary art have found homes across the globe. Alongside of all of her commissions, Shotton has also taken time out to complete unique works for a charitable organisation close to her heart. 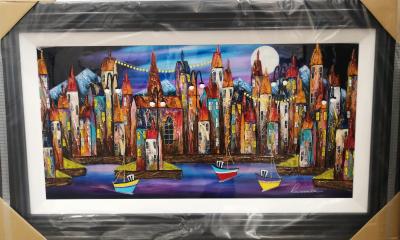 Moonlight over the Harbour 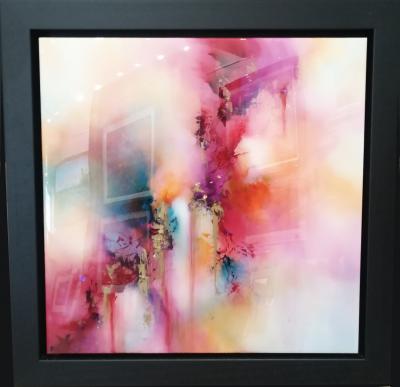 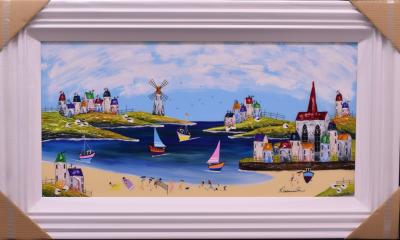