About the Artist Derrick Fielding

View All Art Works By Derrick Fielding
With more than a passing resemblance to a seasonally adjusted and opulently produced and visually directed John Lewis or Marks & Spencers festive TV ad, the compositional splendour of acclaimed contemporary landscape artist, Derrick Fielding was in pictorial evidence way before ad agency creative dreamed up the commercially savvy televisual fayre mentioned at the top. Yet the similarities are there for all to see, and who says that said marketing bods, especially those employed by John Lewis, werent at some point inspired by the paintings of Fielding, which theyve since brought to animated life, whilst figuring in the dulcet tones of Gaby Alplin, Lily Allen et al at a later date. After all, we have all the following core illustrative components in place; snow-filled wintry scenes? Check. Romantic overtures? Check. Cute animals? Check. Effortless, one frame-only storytelling? Check. Whimsy? Check. Nostalgia? Check. Ability to tear jerk? Check. See? We could be on to something here..

Supposition aside, Ormskirk-based landscape artist, Fielding was born in 1965 in the Walton district of Liverpool, and was showing pedigree in the field of art and design from an early age; utilising the reverse side of his painter and decorator fathers wallpaper rolls on which to air his latest etchings.

Something often frowned upon by Fielding Snr, as Derrick recalls times during his childhood getting banished to his bedroom early for his misdemeanours; whereby hed bury his head in the latest copy of The Beano as he served his penance. Growing up on the outer fringes of the city, Fielding was never more than a stones throw from a rural vista and would journey off on his pushbike to discover new and alternative views of existing places; all of which he captured on paper. Speaking on this matter recently, Fielding comments; I ended up spending most of my teenage years travelling around the country on marathon cycling holidays with friends whenever the chance arose. Adding, It always occurred to me that there was so much to see on my bike that you would never notice when travelling by car.

Needless to say art quickly became Fieldings number one subject during his school years, and on leaving secondary education secured his first role in a creative industry as such. That role was one of apprentice sign-writer, working for the nearby (and world famous home of The Grand National), Aintree Racecourse in his native Liverpool. On the job Fielding learned how to paint what he himself describes as enormous advertising hoardings, which were and still are liberally sprinkled around the course. To this day Fielding cites this happy, insightful time during his artistically formative years as the period in which his pseudo animated and graphic interpretation of illustrative painting was borne. Given that Fielding progressed straight from school into his apprenticeship, he never attended art college, and is therefore considered to be a self-taught artist, having not experienced actual tutoring or particular formal guidance in the illustrative endeavours that hes since gone on to enjoy and commercially prosper at.

Having some of the countrys most stunning architecture and iconic landmarks on his Merseyside doorstep, Fielding has made a habit of cementing the very visual likeness of the buildings that piqued his interest on canvas during his spare time, typically capturing them in watercolours purely as gifts for family and friends. Yet encouraged and supported by those who witnessed his illustrative candour, Fielding turned his back on the sign-writing profession in 1999 and decided to bite the bullet and become self-employed. Not solely relying on traditional painting methods, albeit executed in his blossoming, contemporary style, Fieldings fledgling business model also provided framed presentations which came complete with the names of the inhabitants of a given Liverpool street. Keeping his creative options well and truly open, Fielding received a business award for this and also for his novel design of a football board game originated around the same time. On marrying his wife in 2005, she further encouraged Fielding to concentrate on his imaginative and unique, contemporary painting style, which eventually led to broader recognition in all of the right places; culminating in him being approached by one of the UKs leading fine art publishers, Washington Green, who, suitably impressed, offered Fielding a publishing contract thereafter.

In terms of what motivates him to paint, Fielding still maintains that its predominantly the naturally occurring spoils he has on offer around him on a daily basis in the North West of England. Having stayed in the region of his birth, Fielding now lives and works in the village of Burscough Bridge, near Ormskirk in West Lancashire, and is continually surrounded by fields populated by cows, sheep and horses, while the untold beauty of the Lake District is a mere three quarters of an hours drive away. The Lake District in particular is a rich hunting ground for my ideas - bleak and barren landscapes broken by trees, gnarled and twisted by the wind.Yet the seemingly unseen element which Fielding insists is critical to his every composition, is in ever present supply as far as hes concerned; that being the much coveted and well documented warmth and humour associated with this part of Great Britain. In his own words, Fielding implies that; A spectacular mountain view can be softened by a washing line of the week's underpants and bras!

As well as The Lakes, Fielding also waxes lyrical about what Scotland, Ireland's west coast, and Cornwall have to offer his take on art, and speaks especially fondly of southern Scotlands Tweed Valley, which he describes as being as beautiful, unspoilt and dramatic as the Lake District, but without the visitor and commercialised aspect. Fielding sees humour in much of his illustrative quarry, with birds being chief amongst this according to the highly popular artist. I love the humour of birds congregating in huge numbers - sometimes on a telegraph wire or a tree - and yet go unnoticed by most people passing by. Fielding compares the humourous direction of his childhood comics to the panoramas he lovingly crafts, insisting that he avoids making his paintings overly serious, and hopefully providing a little light entertainment for his audience as a considered result.

Fieldings back catalogue has been likened to Eyvind Earle, the American artist, who himself is fascinated by the onset and manipulation of shapes cast by shadows, especially when the sun drops in the sky and they grow elongated and distance-encompassing. Fieldings originals and limited edition prints sell by the bucketload as you can doubtless imagine, not only here in the UK but across Europe, America and Asia, with demand regularly outstripping supply. 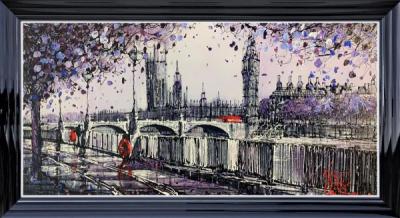 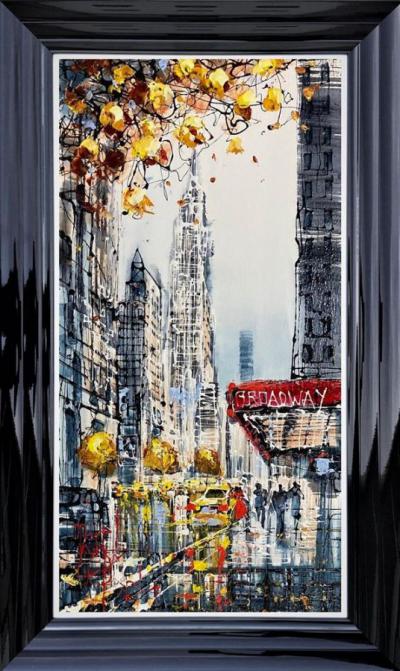 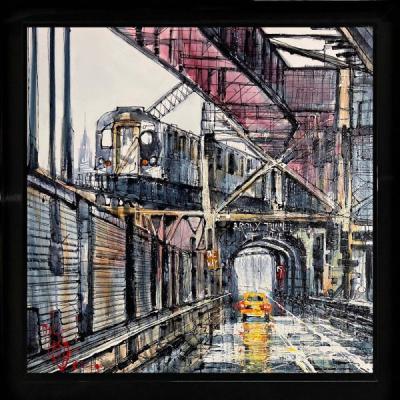