About the Artist Darryn Eggleton

View All Art Works By Darryn Eggleton
Family trips into the African bush during his childhood both fired a young, impressionable Darryn Eggletons creative imaginations as well as fuelling his desire to learn more about the subject matter that would go on to have a significant bearing on his professional future. Born and bred in South Africa in 1981, the critically acclaimed contemporary wildlife exponent grew up pretty much surrounded by stunning, natural vistas together with a plethora of animal attractions. He fondly recalls his earliest forays into the wonderful world of wildlife art rooted firmly in these regular sojourns.

Not that as a family they needed to spread their wings too far to encounter such sights and sounds, courtesy of being located within the borders of the Kruger National Park during Eggletons formative years.

Speaking in more recent times when interviewed by numerous sources, Eggleton tells of a region (then found on his immediate doorstep) which he describes as being; particularly blessed with its vast open spaces and secret places, dramatic seasons and variety of life forms. Eggleton hasnt  unsurprisingly  strayed far from this rich and varied illustrative hunting ground over the years from childhood into adulthood, and today flits between here in the UK and the forever magnetising, Africa of his youth.

Scrutinising his preferred approach and method when it comes to creating the graphically traffic-stopping compositions he makes a pleasing habit of generating, Eggleton states how his hallmark original pieces and limited editions single out the chosen subject which features prominently within each piece, physically isolating the muse (the muse in question typically being instantly familiar creatures of enduring marvel and mystery) against a backdrop of the one colouration, so only the merest hint of their environment is seen through the reflections in their eyes. This, tantamount to cinematic ambience ensures that each animal appears to visually project itself far beyond the parameters of the canvas itself, crucially affording the individual study a sharp and immediate relief. In addition to this, and to paraphrase Eggleton himself, such theory and practice offers a dual effect of pictorially fostering a strong and lifelike presence from the outset. More than even this, it conjures up an environ which; seemingly places the viewer within the physical experience of the painting, according to Eggleton himself.

Shortlisted for a collection of awards since turning professional, among these are the industry and peer-acknowledging likes of the David Shepherd Wildlife Artist of the Year and the Hirum Blauveldt Purchase Award. Whats more, Eggleton has completed two residencies at the Nature in Art museum in Gloucester, enjoyed a tenure as artist in residence at the Leopard Creek Golf Estate (on the banks of the Crocodile River in Kruger National Park) and has had work auctioned for charities including Room to Read in Zurich the Backing Borana Trust for rhino conservation. Surprising nobody, Eggletons compositions have become much sought after, and is now inundated with requests for commissions from not just corporate and private collectors, but exclusive game lodges as well. 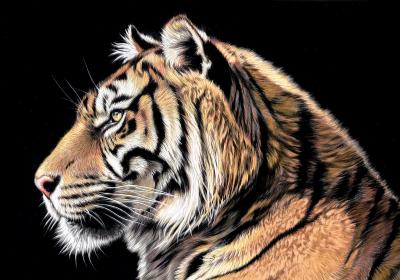 The Wild Side II