About the Artist Duncan MacGregor

View All Art Works By Duncan MacGregor
The majority of Duncan MacGregors art tends to focus its attentions on the sea, and captures panoramas and vistas that essentially tell a visual tale that would make any old sea dog proud. But theres very good reason for this subjectivity, that being not least the landscape artists background and the accumulative time that he himself has spent at sea. As an experienced and adventurous sailor, MacGregors many voyages have furnished him with all due inspiration to create the magnificent compositions that hes today renown for. Be it the composing of evocative, stirring coastal spreads or the painted manifestation of an exhilarating stint at sea, battling the waves and making haste, MacGregors representations as a contemporary marine artist are enigmatic to the last brush stroke.

Its this confidence in his works that sees him spoken about as the UKs most exciting and innovative sea landscape-interpreting exponents. MacGregor elects to combine epic skies, enigmatic reflections and a host of distinctive white sails to produce what art lovers and critics alike agree are spellbinding pictorial narratives chronicling coastal and sea life.

MacGregor was born in 1961 and spent his formative years in the Midlands, which is geographically as land-locked as it gets in the UK. Yet despite residing so far inland he found time to forge a deep and meaningful relationship and subsequent never-ending love affair with the sea, especially in the aftermath of spending what turned out to be a highly significant 18 months circumnavigating the Atlantic Ocean, followed by a tour around Britains ever-changing coastal periphery. Having finally putting down his roots with his own family in a remote part of Norfolk, MacGregor derives much if not all of his creative inspiration from the seaboards of this county and the surrounding immediate landscapes and communities that rely heavily on the sea as a source of income, either through related industry or the tourism factor. The artist specifically concentrates on the effects that natural light sources play on colour whence they hit the canvas, whilst his particular favoured palette conveys the cool shades and tones indicative of a traditional seascape. MacGregors work is considered abstract should a label be required, with his typical acrylic-based compositions beholdant upon rich texturing and depth of application delivered with a spontaneous and unbridled energy according to voice in the contemporary art profession.

MacGregors exhibitions, while steadfastly dependant on the ebb and flow of coastal tides and the activities that ensue in and around this environ, have evolved in terms of materials of late however, and the artist isnt backwards in coming forwards when it comes to experimenting with pioneering surfaces within this genre of landscape capture. MacGregor is now championing and very much found at the vanguard of producing what some might consider traditional painted themes on very alien surfaces. The artist has produced his work on both glass and most recently, aluminium so as to offer an altogether different take and visual understanding and presentation on the subject matter.

The artist himself describes how infusing paint onto such surface areas affords the finished article a completely transformed feel. The metallic sheen brings every nuance into sharp relief according to MacGregor, while otherwise radiant colours are converted into subtler, more muted iterations of their former selves. Explaining in greater detail, MacGregor tells how standard-fit blues willingly react and interplay with the silvers and greys found beneath, to foster a new, improved dimension to the seas colour and vibrancy.

MacGregor himself sums up his life and artistic works by concurring; "I spend as much time as I can experiencing the power of the sea at close quarters. I am an experienced sailor and it is the ocean which inspires and moves me to capture the energy and joy of what I see and recreate it on canvas." MacGregors back catalogue of original works of art have, and still continue to feature prominently in galleries and exhibitions across the UK and further a field, whilst a large percentage of his compositions are housed in private collections. 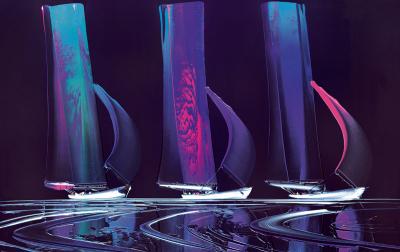 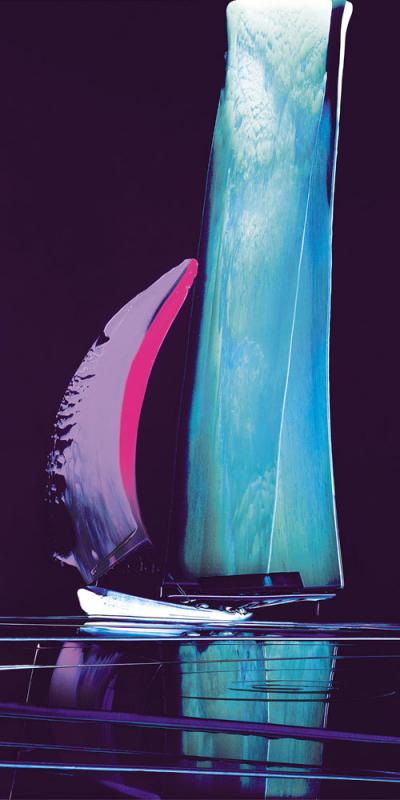 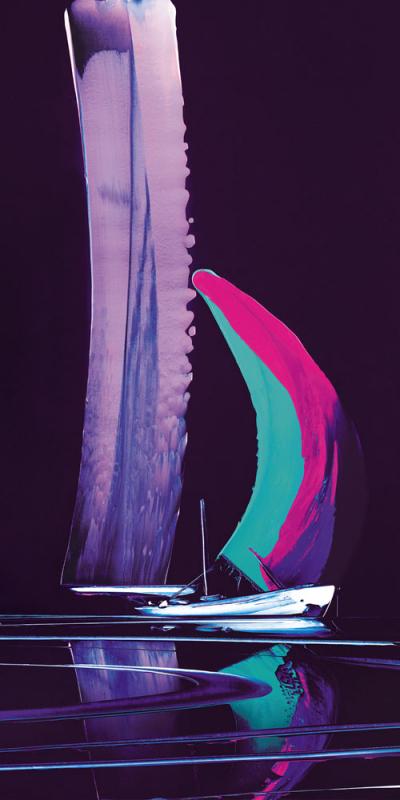