About the Artist Keith Proctor

View All Art Works By Keith Proctor
Born in Newcastle-upon-Tyne in 1961, Keith Proctor is a self-taught artist, specialising in oils who originally spent his time painting nature scenes, depicting birds, dogs and horses, before progressing to people and town scenes capturing his native North East. Nowadays, Proctor puts children and youngsters very much at the centre of his works of art, displaying a knack for framing his joyful subjects in timelessly innocent, playful, adventurous poses.

Proctor was encouraged by his late father, Mark to carve out a future for himself in the world of contemporary art, after seeing the talent in his son that all general art fans and collectors have concurred with since. And his father was well qualified to recognize artistic talent, given that he himself was a commercial artist. Proctor recalls how his father would sit and sketch anything, incredibly well and incredibly quickly too. As a youngster he was fascinated, and implored that he was shown how.

Proctor to this very day practices what his father preached back then, and what he still believes to be the golden rule of sketching. That is to never draw a straight line, nor complete a line of any description, whilst alternating with the pressure applied to the lead on the canvas to make the marks that it creates all the more engaging. Invaluable advice, admits Proctor, and essential tricks of the trade as it were to sketch with ease.

Oils are Proctors favoured choice of creative expression, and hell only apply these to a particular study during the hours of natural daylight, rather than allowing artificial light to cloud his judgement.
Constructing the building blocks of the piece with a charcoal sketch, Proctor pays critical attention to the proposed balance of the composition long before paint is added to the creative conundrum. Somewhat quirkily Proctor relies on positioning a large mirror directly behind him, so he can keep glancing over his shoulder to value the different perspectives a mirror would cast on the piece being assembled.

Proctor, like his father, works with vim and vigour when administering the oils, frequenting a limited palette, well mixed beforehand. Its this signature bold, rapid brushwork that helps Proctor know when the piece in facing up to conclusion, understanding that hell overwork it if he starts slowing down and fine-tuning areas of canvas. Proctor reckons that he can almost hear his father urging him to leave it alone should he stray of his fast and furious path.

As a force of habit, Proctor listens to music as he paints, and cites an eclectic mix of genres as the soundtrack to his creative process. Having said that  and whilst putting together his latest collection featuring his own son, Jack as a muse  Proctor admits that crooner Tony Bennett has singlehandedly provided the aural backdrop. 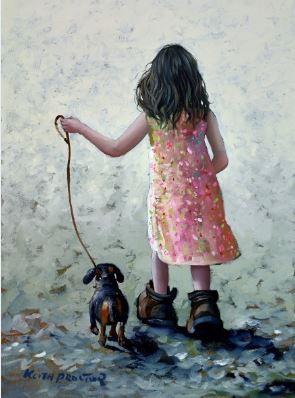 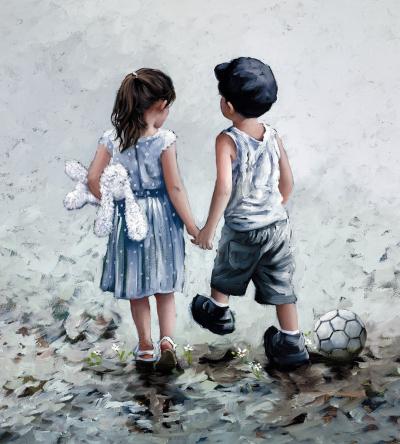 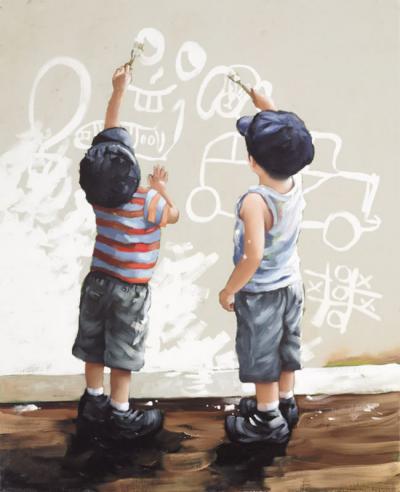