About the Artist Pele

View All Art Works By Pele
As a footballer and ambassadorial sportsman, he needs no introduction, in the same vein that Mohammed Ali wouldnt, should we be talking about boxing. But were not talking about boxing, rather were talking soccer. And the one name synonymous with soccer is of course, Pele. Arguably the greatest player to have ever graced the modern game, Edson Arantes do Nascimento was simply a magician with the ball at his feet. Or on his knee. Or chest. Or head.

Universally spoken of as the greatest athlete of all time, Pele is without doubt one of the most instantly identifiable sportsmen in the world, with an astonishing goal-scoring record to boot of some 1,283 goals in just 1,346 professional matches, made all the more impressive when you consider he was more often than not man-marked in games on account of his mercurial skills. But the stats dont end there. Pele was also acknowledged as being able to cover a distance of 100 metres in a mere 11 seconds and could leap a distance of 1.8 metres in height and 6.5 metres in length to boot.

Pele was born in Tres Coracoes, Brazil in 1940 and was afforded the nickname of Dico by his family, yet was known by the Pele moniker by his soccer friends. A gifted athlete across most disciplines, Pele excelled at football and it was observed that he was as an accomplished player during his formative years as some seasoned veterans. At the age of just 11 Pele appeared on the radar of one of Brazils most noted players of his generation, Waldemar De Brito. Four years on and aged 15, De Brito brought Pele to Sao Paulo and to the Santos football club. He made his debut for the senior team that same year, 1956, and quickly gained a reputation as a prolific goal-scorer. Within 12 months he had been selected to play for the Brazilian national team based on his electrifying form in the league and shortly after that Pele led his countrymen to victory in the World Cup Finals, Brazils first international championship.

Pele went on to become the only player to have ever participated in a triumvirate of World Cup victories, where he was instrumental in ensuring Brazil lifted the Jules Rimmet trophy in 1958, 1962 and again in 1970. That very same year Pele notched up his 1000th goal, there and then sealing his place in the history books as the games most accomplished striker. Pele announced his retirement in 1974, but was lured out of retirement 12 months later after being approached by the New York Cosmos, waving a multi-million pound contract as bait. This lucrative contract confirmed Pele as the highest paid sports star in the world at the time and he remained in the employ of The Cosmos for two years. Despite his pace had slowed, Pele offered immense value in terms of popularising football  still perceived as a fringe sport in North America at this juncture, which continued long after his (this time, official) retirement as Pele accepted an invitation to become an international ambassador for the sport and help raise its profile, whilst also working tirelessly to promote peace and understanding in cultures and societies through friendly athletic competition.

In terms of Peles art, its obviously not about him discovering another God-given talent - this time for brushwork - once he hung his boots up for good, and going on to produce a collection of watercolours to rival Monet, as that would be just too much to bear. No, Peles art is more a case of various stunning photographs and iconic images depicting the genius himself during his professional sporting life and captured whilst at the peak of his natural powers and athletic prowess. Like for example when along with Brazils national team he lifted the FIFA World Cup aloft in 1970, as well as a photo opportunity with George Best, or executing one of his signature bicycle kicks and swapping shirts, post-match with Englands Bobby Moore. Produced as limited edition giclee prints these enigmatic, timeless photos lend themselves beautifully to fine art interpretations, all personally signed by the footballing legend himself. 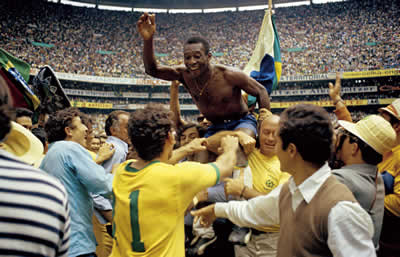 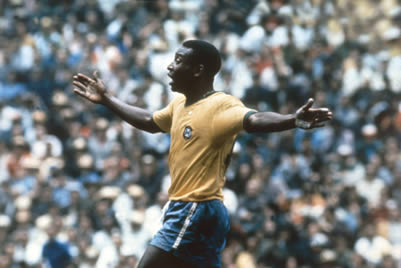 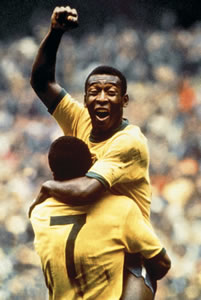