About the Artist Bob Barker

View All Art Works By Bob Barker
Laced with atmosphere, soaked in whimsy and hung out to dry by gothic candlelight. Darkly hewn cottages and terraced houses, solemnly-lit streets, foreboding, leaden skies full of angst and resentment. All of these give way to reveal the very real focus of Barkers unique studies and insights into his childhood growing up in a Milltown in Yorkshire. And the subject found at the core of each piece is set in stark contrast to the swirling mists, watery reflection and glowering, snarling intent of an industrial heritage lost on todays generation.

Intensely coloured people, typically children, offsetting the blackened canvas with their jubilation and excitement, detracted from the participation in a game, a sport. Football, cricket, playing on bikes, skipping, running, jumping, living.

And living in under an enigmatic spotlight, seemingly at odds with the rest of the Dickensian dusted production values.

The artist responsible for these unique, hauntingly beautiful studies in oil on canvas is namely, Bob Barker. Resident past and present of a Yorkshire Milltown, who has received no formal training, nor qualification to theoretically enable him to create such majestic studies. But that he does, and has done ever since being gifted an oil painting set for Christmas in his 12 year.

As a lad, Barker would regularly rush to the mill where his mother was employed as a weaver after school, and await her to finish her day. Hed be fascinated with the environment in which she worked, the building and rooms within, the smells, the sights, her co-workers and most importantly, the processes that were involved to manufacture the products. He literally loved to soak up the ambience and talks at length about this and how it fired his inherently inquisitive mind.

Spurred on by nostalgia for his native region, Barker retrospectively draws on his childhood memories to envisage each heavily-laboured piece with the benefit of adult eyes. He tells how locals would view the subjects that he captures on canvas as buildings and townscapes tarnished by soot-blackened stone and polluted skies, indicative of the industry that serves this community and its people for as long as the memory can stretch. Yet Barker sees colour. Not the depth of wishfully-sought colour witnessed through spectacles comprising a rose tint, suffice to say. But a sobering, relentless colour that punctuates this darkened peripheral vision with a comforting, inviting regularity. Barker describes wet Sienna cobbles and Prussian blue shadows, complete with burnt umber and cadmium skies. These are the subtle, blended hues and saturations of Barkers childhood paintbox.

Weavers cottages, cotton and woollen mills, Yorkshire flagstones and cobbled streets are the urban flora and fauna that occupy Barkers immediate landscapes, and ones that set the tone in which the actors treading their street boards are individually and collectively illuminated by. Barker fervently believes that inspiration is found within, and is raised to the surface on interaction with a suddenly visualized canvas in real time. The sky, buildings, at the break of day or whence the sun packs its beams up for another day and under the still of a bright moon. Introduce the unpredictability of weather, and the scene is before you.

With his muse in mind, Barker then considers the study back in his studio. Starring intently at his blank canvas hell sit for quite a while sometimes before introducing that first drop of oil onto the surface. Barker must visualize the composition. Alter the skys colour if the mood takes him, place buildings in new locations, make it rain. The combinations are limitless to the scope of a restless, creative imagination. A few lines are quickly placed, before the first drop of paint is committed. Barker is known to paint in a range of styles and with a diverse range of subjects, despite his signature flourishes we describe above, as hes perpetually experimenting and mastering new techniques of brush and palette knife appliance. Naturally right-handed, Barker  when in this explorative state of conscious  will wilfully experiment with his left hand, and then alternate between the two, so as to provoke different effects and perspectives that otherwise wouldnt have necessarily seen the light of day. 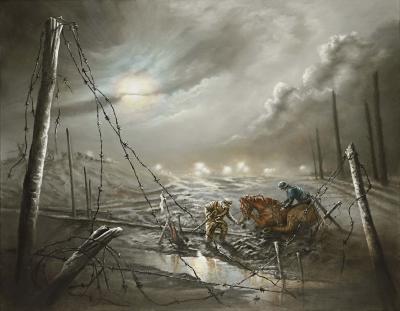 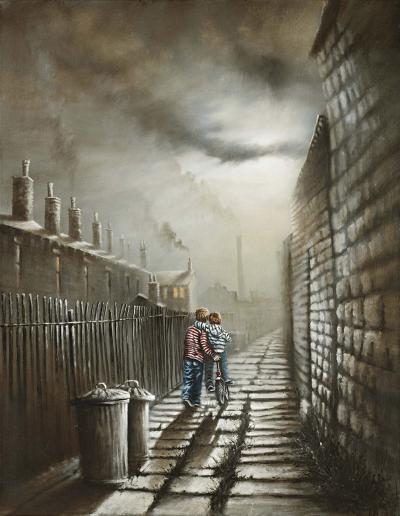 Gonna Be a Bumpy Ride 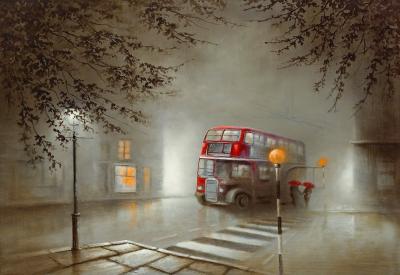