About the Artist Mike Jackson

View All Art Works By Mike Jackson
Self-taught artist Mike Jackson was born in Manchester in 1962, and as with many artists, discovered a love of art at a young age. Upon leaving school, he had few qualifications, but still wanted to be an artist. Jackson says he was encouraged to learn a trade, so that he would always have something to fall back on, so he became a butcher.

Eventually he moved back onto the career path to be an artist, and became a graphic designer, teaching himself the job through various computer packages. At the same time, Jackson was practising his art, honing his skills with different mediums, but concentrating mainly on watercolours for many years until encouraged to try acrylics by a friend who owned a gallery. From then, he has preferred to use acrylics and has never looked back since.

Mike Jackson is well known for painting his loveable hoodie characters in various situations, but has changed his style in his more recent art. In his more recent pieces, he paints seascapes, with little boats in the harbour and houses by the sea. There are people passing by on bicycle and on foot, yet he still manages to keep his familiar humour in the art as well. 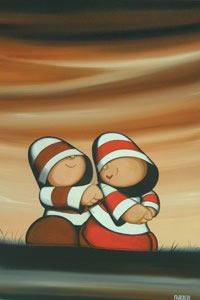 For You My Love 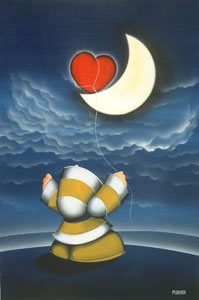 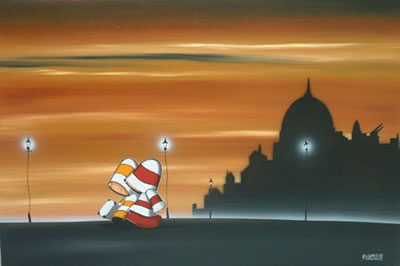