About the Artist John Myatt

View All Art Works By John Myatt
We all have it drummed into us from an early age that crime doesnt pay, however for one contemporary artist, that doesnt quite ring so true. But before we get bogged down in details, we must confirm that the artist in question, DID serve a prison sentence for art fraud and DID learn his lesson. Whats more, although he paints in a contemporary style, his subject matter is the most traditional of traditional. Confused? Then pull up a pew and let us explain just who John Myatt is, what he does and more importantly, what exactly he did that warranted at stay at her majestys pleasure. Seriously, you could make a film about John Myatt, so rich and colourful is his life. And apparently someone fleshed out the bones of a celluloid re-telling in 2007, yet no word as to whether it got off the ground as such.

A son of a farmer and born in 1945, contemporary/traditional artist, John Myatt might have been described by Scotland Yard as, and we quote; The biggest art fraud of the 20th Century - which admittedly would make a great strapline for a best-selling book or movie  however things started off a lot less controversially for Myatt back in the late 1970s when he found himself the centre of attention for all the right reasons.

The spotlight fell on Myatt for his co-song-writing efforts on the number one chart hit, Silly Games which hit the top of the UK Top 40 for Janet Kay in 1979.

But then things took a turn for the worse for Myatt, as on returning to his native Staffordshire from London where hed been living and working as a songwriter previously, his wife packed her belongings and walked out on him and their two small children in 1985. It wasnt long before Myatt arrived at the conclusion that he needed to secure alternative work in order to provide for his immediate family, as his role as a poorly paid art teacher at that time saw him struggling to pay the bills. He also thought working from home would bring him closer to his kids whilst also alleviating childcare costs.

Myatt turned to art once again, however this time practicing it rather than teaching it as a subject. And id didnt take long before he started to gain a reputation for his work, especially in the direct aftermath of placing an ad in the Private Eyes classified section promoting himself as an artist who would produce fakes of other, famous artists works for between £150 and £200. Bear in mind this was the mid-1980s, yet his service was still priced competitively. Based on Myatts initial successes a legitimate business was created, and his paintings were clearly flagged up as fakes and making no pretence to be anything other than good quality copies, and therefore all was tickety boo.

Then a certain (discovered at a much later date) fraudster going by the name of John Drewe appeared out of the woodwork and introduced himself to Myatt as Professor Drewe, claiming to be a nuclear physicist. He put an offer on the Myatts table, inviting him to produce 14 paintings over the following two years, which Drewe  as his new business partner  would find homes for. The thought of on-going cash generating and the short term security that this would afford him and his family proved too much of a lure and they shook on a deal.

This arrangement proved to be lucrative for Myatt, as clients were found for all the paintings an d everything was going swimmingly at this juncture. And all above board as they say. That was up until 1986, when Myatt originated a piece on Drewes request in the specific style of well-known Cubist painter, Albert Gleizes. Unbeknownst to Myatt, Drewe had rocked up at universally acknowledged art auction house, Christies offering them what he was billing as a genuine Gleizes work of art. On inspection, Christies were said to have valued Myatts version of a Gleizes study at some £25k. The first Myatt knew about the Christies valuation and interest came when seven days later he received 50% of the money in a brown envelope from his business partner, Drewe. being a man who was attempting to do his best for his young family  and aware that this sum of money would eliminate all his outstanding monetary issues in the one fell sweep  he did what a large percentage of society would do; and accepted the ill-gotten gain as a one-off.

Unfortunately Drewe didnt see this as a somewhat fortuitous chance to feather his nest as a one-off instance, but rather a golden opportunity to build an entire woodland residence. Gradually and unwittingly Myatt was drawn into Drewes now premeditated and organised web of deceit, and eventually went on to paint (albeit forgently) a further 200 blatant and audaciously produced fakes, aping a collection of signature works from a long line of masters. Myatts use of materials to create his fakery was inspired, if not altogether conventional, and included household emulsion blended with KY Jelly, whilst often involving emptying the dust bag contents of a vacuum cleaner to work in that aged look to the canvas. Something they never taught us on either BBC programmes which encouraged art and craft, Take Hart or Blue Peter.

Drewe pocketed the lions share of all the profits during their tenure of trickery and was instrumental in the whole duping process, with Myatt receiving little more than his previous teaching salary as recompense for his artistic endeavours. In 1993 Myatt said enough was enough and distanced himself from the fraud, yet Scotland Yard finally caught up with both parties a couple of years down the line, courtesy of a tip-off from Drewes former partner. For helping the police with their enquiries at every part of an investigation which took four years to finalise, Myatt received a 12 month sentence and released after serving just 4 on account of his good behaviour and possessing no prior record.

On being released from prison, Myatt pledged never to paint again, however his arresting officer convinced him otherwise, suggesting that his talent was too good to let go to waste and coerced a reticent Myatt into painting a portrait of his family. This proved the catalyst to get back into the painting saddle, and his new original works took off for all the right reasons at this juncture. Myatts star is definitely in the ascendancy these days and in 2005 his new phase of (legit) originals were showcased in London at an exhibition opened by TVs Anne Robinson and which ended up being a resounding success/sell out. Now happily married to his second wife, Myatt also has his own Sky Arts series whereby celebrities sit for him to capture their likeness, in the contextual surround of an old masters original composition, whilst the muse talks candidly about their particular career. 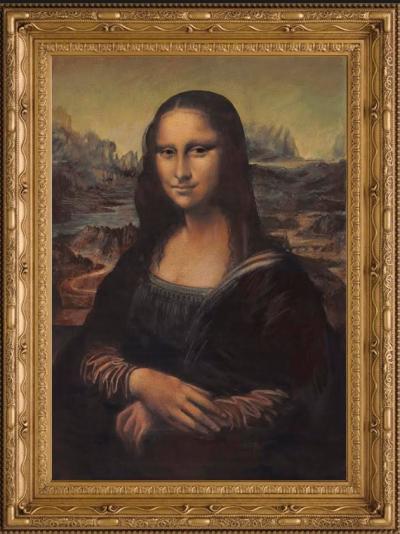 Mona Lisa in the style of Leonardo Da Vinci 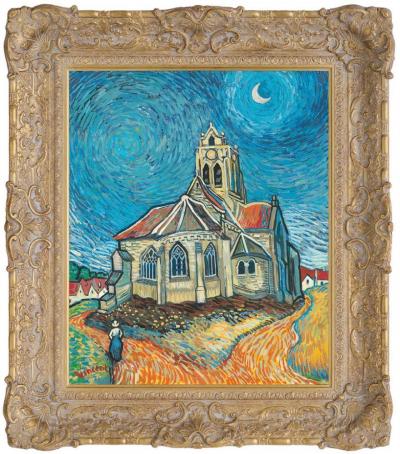 The Church At Auvers in the Style of Vincent Van Gogh 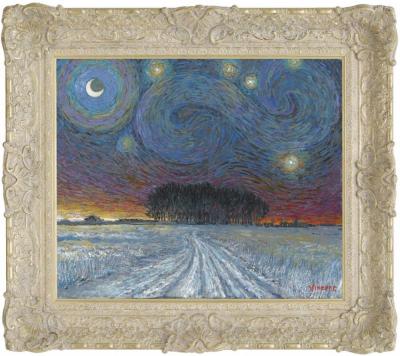