About the Artist Russell Flint

View All Art Works By Russell Flint
He was a much loved landscape painter and watercolourist, who is most famous for his female nudes. As an artist Russell Flint was much respected by his contemporaries. The son of a commercial painter and at age 14 was apprenticed to a firm of lithographs where Russell spent 6 years learning about lithography and printing.Born in Edinburgh, Scotland 4th April 1880, his remarkable talent was discovered at an early age.

Having been a student at the Royal Institution School of Art in Edinburgh, and serving a six year apprenticeship at a large printing works, he decided to move to London to become a medical illustrator at the age of 20.In 1903 he joined the Illustrated London News which took his talents to the far reaches of the British Empire thanks to its extensive distribution.

He married Sibylle Sueter in 1905 and eventually became a freelance artist in 1907 which lead him to illustrate a number of classical limited editions such as Mallory's 'Morte D'Arthur', Chaucer's 'Canterbury Tales' and Homer's 'Odyssey'.

He served in the First World War and became Admiralty Assistant Overseer - Airships. This took him back to his native Scotland, where in 1919 he painted a tiny watercolour called' Hilda's Bonnet' on the linen of a fragment of HM Airship 24 which he had previously commanded.

Post World War I, William Russell Flint's artistic career began to flourish. He painted in France and Spain (until the Civil War), where he produced wonderful paintings reflecting the local scenery and culture.

He was elected Associate of the Royal Academy in 1924, full member in 1933 and in 1936 became President of the Royal Society of Painters in Watercolour. After living in Devon during the Second World War, he and his wife moved back to London where the post war period became Russell Flint's greatest.

His talent with both the watercolour medium and his skill in depicting the female form created a hallmark style which would later become legendary.

In 1947 William Russell Flint was knighted. In 1962 his work was acknowledged by a retrospective exhibition in the Diploma Gallery of the Royal Academy. At the time, Charles Wheeler, the President, paid tribute to the artist, describing his watercolour technique as a 'baffling skill'.

As he became better known he took the opportunity to travel, and Russell Flint painted extensively wherever he went ... spending much time in continental Europe, especially Spain, France, Italy and Switzerland, as well as back in Scotland. 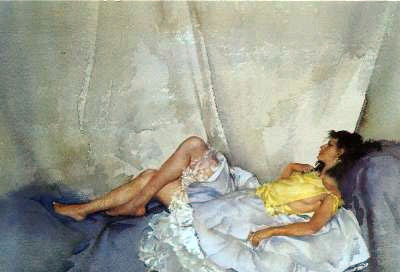 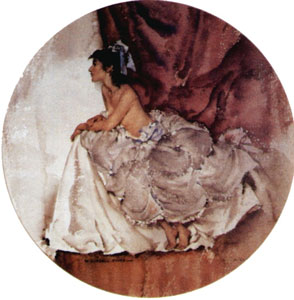 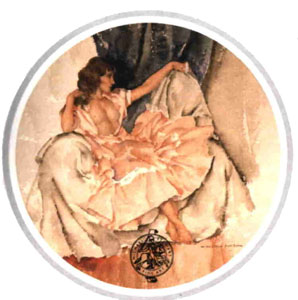