About the Artist Adam Barsby

View All Art Works By Adam Barsby
Celebrated contemporary landscape and figurative fine artist, Adam Barsby puts a lot of his creativity down to his genes; and cites both his mother and fathers artistic sides to their collective characters as being instrumental in his own development. Born in Leicester in 1969, Barsby was the youngest of five siblings, and recalls a very happy childhood, filled with contented thoughts and lively recounts. He also remembers being able to draw from an early age. Barsbys mother was a hairdresser by profession, and he talks of how she had this vision for envisaging a certain look of hairstyle, courtesy of her minds eye, before she even started lopping into and/or styling customers barnets. Which if course is an essential pre-requisite for anyone with a creative bent.

Barsbys father, for his part, was a hobbyist model maker, and would lock himself in his shed for hours, fastidiously labouring over his latest plywood or balsawood incarnation. Anything from boats and planes to houses and landscapes would shape the finished article according to a fondly reminiscing Barsby. To Barsby, his father was the archetypal dreamer, and that is a quality he believes thrives in his own DNA, and more pertinently something hes called upon on countless occasion in his own artistic career to date.

On completion of his secondary schooling, Barsby elected to study for a degree in Illustration at art college, choosing to undertake this course of action at the Kent Institute of Art and Design in Maidstone. Graduating with first class honours to his name in the early 1990s, Barsby began working as a freelance illustrator, taking on a host of projects for art galleries and industry magazines during the following period, whilst all the time developing, evolving and ultimately, honing his own particular house style that would serve him well going forward. After getting as much relevant work experience under his belt as he could muster, Barsby eventually arrived at the decision to turn professional in 1996, and its fair to say, hasnt once looked back as a result.

Certainly in terms of successes and industry recognition theres been absolutely no need to, as just two years down the line he bagged the John Solomon Trophy for being the Best Selling Artist of 1998. Whats more, 12 months on from that acknowledgement and Barsby was crowned Best Up and Coming Artist in 1999, followed up with a Best Selling Artist in the UK accolade the following year, as recognised and presented by the respected, Fine Art Trade Guild here in the UK. In addition to this, Barsby has been nominated for the Best Published Artist gong on new fewer than three previous and successive occasions, namely in 2001, 2002 and again in 2003. On top of this, Barsby has been invited to lecture at several art colleges based across the Midlands, to help shape the next generation of contemporary artists.

As his reputation grew, Barsby was inundated with invites to showcase his individual pieces and collections far and wide, courtesy of a glut of prestigious art galleries keen to exhibit his work. Pretty soon after, Barsby became known to one of the countrys most prolific and successful fine art publishers, Washington Green, who snapped him up and have since collaborated with the Leicester-born artist on a raft of limited edition and unique silkscreen prints; all of which have ensured that his work has gained widespread exposure with even greater audiences near and indeed, far. For the record however, and Barsby points out that his first major exhibition was staged in London, at the highly impressive Harrods Picture Gallery back in 1998, and was attended by an array of VIPs and carefully selected and influential guests; thus providing him with his first taste of what was about to become the norm not too far down the line.

Describing his artistic style to someone who hadnt previously witnessed Barsbys hallmark works, then wed probably explain them to be similar in terms of visual representation and illustrative style to childrens story book titles, on graphic account of their typically vast skies and seas, coupled with vivid and expansive colour swatches, while the perspectives are often distorted to an almost ornithological viewpoint on occasion. Colour-wise the contrast is strong, silhouettes of people in streets and scenes appear blocky but realistic with a strong sense of life but not detracting from the tranquillity of the rest of the piece, and of late we learn that Barsby has been working on a line of sculptures based almost entirely on his existing art-worked characters, again offering another creative alternative. 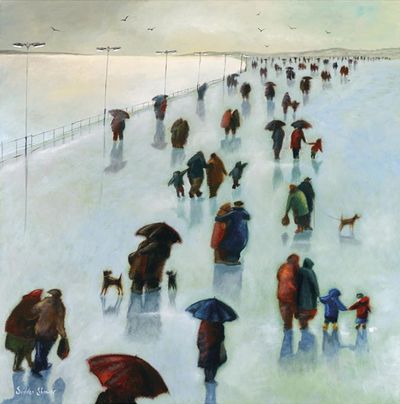 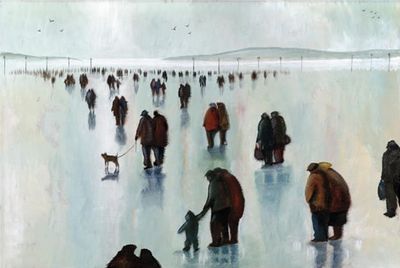 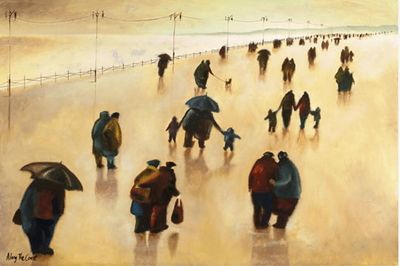