About the Artist Jennifer Hogwood

View All Art Works By Jennifer Hogwood
To many they go unnoticed. Stood around in fields, chewing over their cuds and generally remaining pretty anonymous. Although given that normally theyre large black and white beasts cast against the backdrop of bright green grass, this whole blending into their surrounds beggars belief. But this is no concern of ours; unlike up-and-coming contemporary cow humourist artist, Jennifer Hogwood lets say, whose it is. On this note, its said (and supported by physical evidence) that Hogwoods vibrant, distinctive style arises from an unerring sense of (and appreciation for) colour; which she seamlessly blends with a God-given talent for observation mixed with a mahoosive affection for the aforementioned lactating creatures.

Hogwoods new breed of cow art has been greeted as something of a breathe of fresh air in the genre of animal humourist art, and its clear to see from her quirky, yet emotive compositions to date that the Bedfordshire-born artist loves her bovine chums. So much so that shes been moooved (if you excuse the pun) to dub her favoured subject matter, McMoos. Theres no doubting that Hogwoods highland friends are conveyed - courtesy of her stunning compositions  with a pleasing mix of humour and charm in equal measure.

The cow-connections continue on learning that Hogwoods studio  situated a small walk for cow-kind from her rural Wiltshire homestead  is set in a converted milking parlour (where else?), itself located on a working farm. Hogwood therefore doesnt have to stray far to connect with her habitual muses, as theyre usually found just outside her studio door. But this dreamy rural idyll isnt just populated with her bovine chums, as theres also a steady stream of chickens, dogs and various other critters large and small wandering to and fro during an average studio day according to Hogwood; who clearly seems in her element in this environ. Animals have always figured prominently in Hogwoods life from an early age, and she admits to finding their presence comforting and obviously conducive to creativity, adding; They have such individual personalities and a lovely innocence about them.

Born in 1980, Hogwood spent her formative years growing up in the heart of agricultural Bedfordshire, engulfed by a welcome proximity of rolling fields and wooded areas. Given she had this wild and wonderful naturally occurring playground on tap Hogwood was rarely indoors; and spent a considerable amount of time pursuing her riding interest. And when she wasnt charging across the plains of Bedfordshire, the budding artist was painting and, as she put it, being creative. What may come as a surprise to many however (on perusing her back catalogue of art) is that she benefits (from want of a better word) from no formal training in any given artistic discipline as such. We know, shocker. Hogwood is, therefore, whats referred to as a self taught artist, and in her own words comments; I take something away from every piece I create, and as an artist I am constantly evolving.

In terms of her creative process, the emerging contemporary artist reveals that she dedicates time at the outset to freehand pencil-sketching of the particular subject (yeah, McMoos, as weve already established), prior to the introduction of any painted mediums whatsoever. She carefully constructs the individual layers until shes happy with her lot, and only then begins to apply paint to the outlined compositional job in hand. Hogwood tends to administer this part of the process with a certain, pre-governed rapidity, endeavouring to dry the separate layers as quickly as possible to build up and seal a richness of both colour and texture. Once this has been determined, the artist adds extra-curricular elements to instil a sense of character to each piece, with the collectable editions harbouring a selection of beautifully considered little jewels  if you look closely  to add a multi-faceted sparkle to the cows eyes.

Whats more, Hogwood has invented her very own, unique shade of brown. Were not sure if shes had it patented as yet, but we can confirm here and now that it IS definitely a shade of brown which hasnt been used previously in the history of all things brown. Hogwood deploys this innovative, top secret brown in every painting knowing precisely how it will react when it comes into touch with other colours which arent brown. Or alternatively adds a smidgeon of white or dark into the very brown mix. And just for the record, Hogwood starts each painting with the highland cattles noses, and works evermore outwards, adding in the pre-described elaborate layers of detail until the final stages of white highlighting. 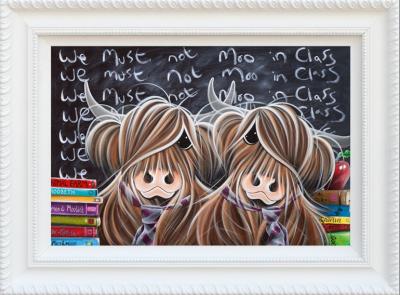 We Must Not Moo In Class 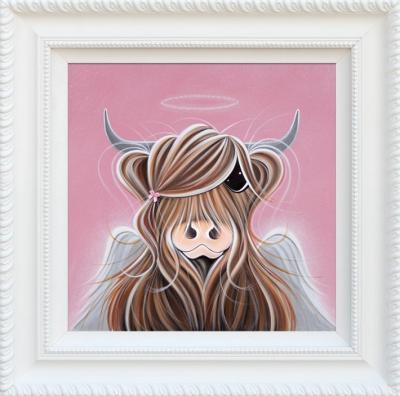 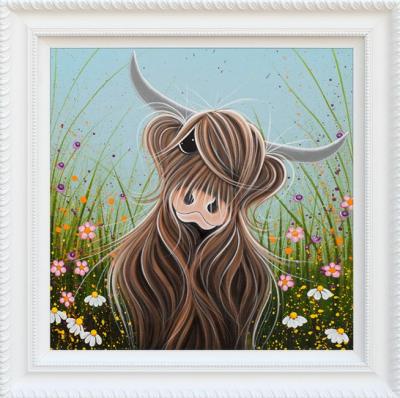