About the Artist Mark Grieves

View All Art Works By Mark Grieves
For critically acclaimed contemporary figurative fine artist, Mark Grieves, his childhood was one of brilliant memories, much like any kid who was born and grew up in the 1970s/early 1980s. arriving in the world in 1971 in North Shields on the Northumberland coast, just below Newcastle-upon-Tyne, Grieves recalls idling his childhood days away engaged in everything from messing around with bikes and playing footie to crafting makeshift tyre swings with which to circumnavigate streams with. So essentially a thoroughly innocent/hugely adventurous upbringing. Grieves father was a shipyard worker, so although times were tough whilst he was growing up (although he remembers his family owning a colour TV!), it was one full of the instilling of respect, coupled with good humour and an innate sense of belonging to a proud community.

But then school was an altogether different matter as far as Grieves was concerned, with school reports habitually stating his inability to concentrate and declaring in no uncertain terms that Mark is a dreamer. Not such a bad quality for a future contemporary artist by any stretch of the imagination.

What was deemed an appalling quality however was Grieves fist fight with his school art teacher which culminated in him being locked in a classroom store cupboard to calm down; and to ponder his likely expulsion as a result. Given that Grieves one redeeming educational feature was his proficiency and passion for creative disciplines, in hindsight a brawl was not necessarily the best plan of action to settle any artistic differences which may have arisen. Suffice to say, Grieves card was well and truly blotted thereafter and ultimately cost him any chances of making it to art college, although he did turn up to one such establishment yet was turned down on the spot when he presented his somewhat sparse portfolio.

Despite being dejected by the turn of events, Grieves didnt allow his head to drop or his dreams to diminish any, and he eventually found his way into the associated creative world of photography, where he remained for many years. As a photographer, Grieves has discovered he has a raft of transferable skills and aptitudes to draw on when he cross-fertalised into the realm of art years down the line, and to paraphrase the celebrated contemporary artists himself, Grieves insists that having an eye for a photo is the same as imagining filling a blank canvas in composition terms.Its only really in recent history that Grieves has made the transition from one creative art to the other, and ultimately taken the punt on going it alone in this professional guise. Speaking on this decision, Grieves laments; With determination, hard work and a bit of luck I aim to move my art onto a whole new level personally.

And theres no denying that he hasnt achieved this since making the break, as his special, unique brand of very stylistically-led, figurative art with more than a little personal touch, warmth and humour have successfully opened many commercial and both emotionally and financially rewarding doors for Grieves as hes focussed on carving out an enviable reputation for himself in the contemporary art world. In terms of inspiration, Grieves concedes that hes pretty much inspired by everything around him on a daily basis, and that no one element or aspect of his life has, or continues to inspire him more than another.

Discussing, and to some extent, elaborating on what he envisages is the creative process from a personal viewpoint, Grieves fervently believes that the real skill is being able to first recognise, and then to filter out what will be hopefully perceived by your future audience to be the juicy bits. As an artist, Grieves readily admits to being drawn to interesting shapes and shadows first and foremost, with light and contrast being a close second when hes running the rule over potential compositioning of subject matter. Revealing himself to be a massive fan of comic book art, Grieves rejoices  and himself becomes animated in his expressing of the way their creative architects manifest these huge fantasy cities and structures that are all-consuming elements of this enduring genre. To Grieves mind theres not many skills to rival that of being able to create an image where the viewer can fully immerse themselves into the imagery which stares back at them from the page, canvas, lens or screen. Which probably goes some way to explain why Grieves elects to delve deep into his own visually astute memory banks in order to illustratively dramatise his current graphical reveals. Grieves; It's like a slideshow reference library that I can call upon at any time.

Describing his artistic approach to individual pieces of his art and the process in summarized form, Grieves suggests that hes far from being a prolific sketcher these days, not compared to the infinite hand renderings hed complete without invite as a child. Today Grieves more normally subscribes to creating the image directly onto the final canvas surface, and because he favours employing his oils, its the start of a labour and time-intensive process. Once Grieves has fulfilled his geometrically outlined shapes and determined where precisely the shadows will fall, he experiments with colour tests, before finally beginning to construct the separate layers of colour, one after the other.

The final piece of the artistic jigsaw, is the deploying of Grieves almost signature figures, which effectively inject life into the piece, followed by a period of reflection where hell hang the painting up and consider it from different aspects for the next couple of days, observing it in differing lights and with alternative eyes before eventually settling on it, or, not as the case may well be. Its a kind of organised chaos, which  based on Grieves admission of applying his oils with watercolour brushes, which he never cleans and leaving opened paint tubes lying around on the floor inviting accidents  cements this notion, yet which has done his career no harm whatsoever. 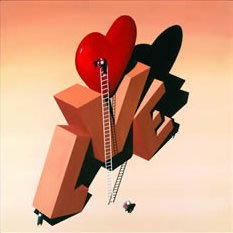 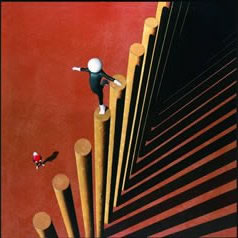 I'd Do Anything For Love 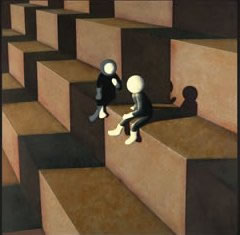