About the Artist Michael Simpson

View All Art Works By Michael Simpson
London born and bred he might have been (we can confirm, he was), yet exciting contemporary sculpture artist, Michael Simpson owes his creative inspiration to the breath-taking sights and sounds of (very) rural North Wales. Courtesy of his grandparents owning a farm in this beautiful part of the Principality, family holidays were based there and often; and as a direct result Simpson was exposed to a veritable cornucopia of wildlife-rammed vistas and panoramas.

Simpsons father, something of a talented amateur artist himself, obviously encouraged his young charge commit to paper what and when he saw what he did out in the field so to speak, and armed with his sketchbook a young Simpson roamed freely in this splendid wilderness, capturing plants and animals left, right and centre on his travails.

Recalling the very first time he clapped eyes on a pair of boxing hares siding up to one another as a child exploring the delights of the island of Anglesey, Simpson spoke of being transfixed by what he called their mad March behaviour, and its clear to see that these initial encounters with the creatures proved the creative catalyst for the inherent artistic work that was destined to come at a later stage. With regards to this particular, documented insight into the hares way of life, Simpson to this day cites this brief interaction as the moment in which his lifelong interest in animal behaviour was sparked. Furthering his interest in this subject matter, Simpson originally intended to study Ecology and Wildlife Conservation at university, and after gaining a bagful of Science A Levels (and a fourth in Art) decided on a quick U-turn at the eleventh hour, and opted instead to pursue his higher education in a fine art environ; which ultimately paved the way for the career hes enjoyed thus far.

As luck would have it, Simpson happened to benefit from the tutelage of an award-winning sculptor who was teaching in his department, and after enrolling on a specialist extra-curricular course ran by said sculptor, Simpson quickly arrived at the conclusion that his future lay in this specific area. Simpsons potential was so great that he even managed to sell his first prize-scooping moon gazing hare sculpture to an influential local art collector at his Leavers Exhibition that year.

With his confidence fortified by this positive and unprecedented reaction to his final year work, Simpson seized the moment and ran with it, culminating in the somewhat ambitious step of setting up a studio in the North Wales countryside which had so strongly influenced his art from the outset. Burning the candle at both ends, Simpson worked day and night on his technique and steadily over a period of time began to see the fruits of his sculpted labour as interest in his works gained momentum. Plugging away he gradually gained a reputation for his fastidiously-detailed pieces, at first locally, then further afield, and eventually he found himself in the fortunate position of being able to command good prices for his finished articles from both his studio surround and art galleries across the UK with whom hed forged working relationships with in the meantime.

Today Simpson is widely regarded as, arguably the UKs most popular wildlife sculptor, and is represented by one of the countrys leading art publishers, DeMontford Fine Arts, whilst he now resides on the edge of Dartmoor  another staggeringly beautiful corner of Britain  with his family and exhibits and sells his highly collectable sculptures across Europe and even as far as America. 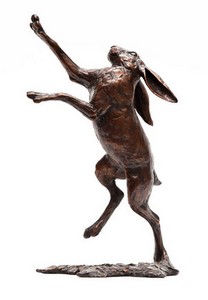 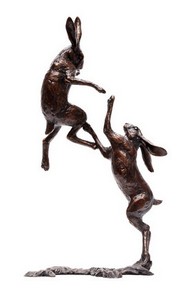