About the Artist Mark Edwards

View All Art Works By Mark Edwards
Two men of a certain age, class and vintage are pictured amid a snowy scene, mid-December or mid-January, we cant be certain, whilst in another similar composition one soul peers upwards toward a snow-filled sky from the depths of a mid-winter beneath. Menfolk, austere-looking are perpetually looking at something or for something/one. Whether that thing is at their feet or alternatively found somewhere up in the sky, theyre constantly searching for whatever that absent commodity is. With typical names like, Man Watching Crows, Looking for the Right Place and Under the Bridge the clue is also found in each compositions title too, should anyone still be in any doubt as to the missing element.

Described above are all the illustrative hallmarks associated with acclaimed contemporary figurative and landscape fine artist, Mark Edwards. Albeit a visual summary of his recent years pictorial offerings, as will become clear later. But like night follow day, later  in Edwards case  follows before. And before any of this took place, Edwards attended school, which he departed as of 1967.

Thereafter he attended Medway College of Art where he opted to undertake a course of study in Fine Art, and was also, incidentally, the place he first clapped eyes on the woman who was set to become his future wife, just for the record. Edwards finished his artistic higher education at Walthamstow College of Art in London.

The story then takes us to 1974, and in the direct aftermath of a brief spell as a painting tutor at a local adult education centre in Medway, Edwards and his wife, Sally, purchased an old 1958 Ford Prefect and drove all night; in a Roy Orbison manner. We assume the journey took that long as they were after all venturing as far north as the very tip of the Scottish highlands. And very much out in the sticks. And it was there, amid the shores of the aptly named Loch Hope, that the couple rented a tumbledown shepherds cottage with no electricity source. Irrespective of their immediate lack of creature comforts, Edwards was deeply inspired by their new environment, as he chose to make this place his home for another 28 years. The first 10 without electricity according to those in the know, and they didnt move until such time as the couples last child headed off to university on which note they relocated to a smaller cottage/studio in the local village.

Throughout this period, Edwards forged ahead with his art and was a regular exhibitor across Scotland at this time. Having said that, and with three children to support, needs must, and to supplement his creative dream Edwards found work on a local country estate where he held the position of gillie during the fishing and stalking seasons. A temporary, season role that he reprised for the best part of thirty years, serving the nearby Duke of Westminsters land. Despite becoming a freelance book illustrator and commanding a decent salary for it in 1980, Edwards continued his estate work, which by that stage was not only augmenting his principle income but providing him with a rich vein of reference material for the very nature of his then style of compositional work. Edwards had gained a reputation for his field sports paintings, and coinciding with the Edwards family home being finally in receipt of both electricity and a phone line in 1984, he was approached to join the ranks of the prestigious London-based art publishing agency, Artist Partners.

This collaborative arrangement positively flung open the doors for Edwards, affording his back catalogue of work his broadest and most far-flung audience to date, and suffice to say he went from strength to strength, creatively and commercially as a result. Indeed, from this juncture onwards Edwards was invited to illustrate book covers and jackets for some of the UKs most respected and household name authors of both fiction and non-fiction literary works. From authors such as Kingsley Amis, Beryl Bainbridge, Sue Townsend, Michael Morpurgo (including War Horse), Philip Pullman (as seen in the BBC adaptation of the Sally Lockhart Quartet recently portrayed by Billie Piper) to no less a famed scribe as the bard himself, William Shakespeare.

And then there were the picture books and childrens titles like The Sand Children by Joyce Dunbar and one which its fair to say most people will be familiar with, the Narnia Chronology by CS Lewis (published in May 08); all of which have been brought to life by Edwards illustrations. This was followed up in 2009 by the completing of an 18-book series of Falco titles by the pen of Lindsey Davis.so acknowledged was Edwards illustrative bent that his techniques were scrutinised alongside those of his equally esteemed peers in the book, The New Guide to Illustration (Phaidon Press 1990). However Edwards interest in his hitherto style of illustration and the habitual painting of seasonal field sport pursuits waned, and in 2007 he called it a day for this particular brand of visual communication and instead looked to other topics and mulled over alternate creative perspectives from which to go forth and (hopefully) prosper.

A courageous choice given his levels of success thus far in his career, but his bravery paid off as Edwards began the creation of his present day series which we led with in the intro; namely The White Wood. A sell-out exhibition held at the prestigious Tallantyre Gallery in Morpeth in Northumberland in 2008 ushered in a new compositional dawn for Edwards and heralded the start of a complete new chapter in his artists life as he was approached by one of the UKs leading art publishers who were keen to collaborate with Edwards as he went forward in his new guise. Washington Green wanted to exclusively sell limited edition prints of Edwards new direction of artistic endeavour, only on a global scale, which to the artist was un-precedented in its ambition until then. But Washington Green were true to their word and have since ensured that Edwards portfolio including this new breed of pre-described work has travelled far and wide, including Europe, Australia, Asia and North America. 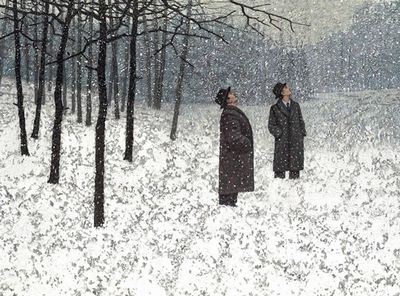 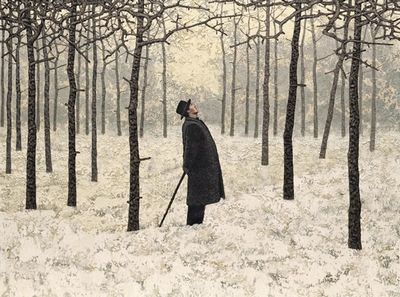 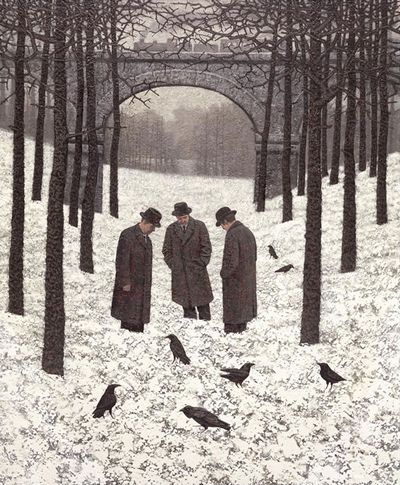