About the Artist Neil Dawson

View All Art Works By Neil Dawson
Fine artist, Neil Dawson is famed for his visual execution of an intoxicating and mesmerising raft of cityscapes, which he plots with a dazzling array of glorious tones and redolent shades to subjugate a sprawling metropolis. Dawsons magnanimous urban jungle gleefully pits dynamic lighting against rain-dashed surfaces, which throw creative caution to the wind as each element and then some glares off a perpetual cavalcade of familiar buses and taxi cabs, be they pictorially native of London or New York. Theres an uplifting photographic quality to each Dawson composition, that radiates a virtual reality from the canvas, with a real sense of anticipation that the frame could spring to life and jump forth from its frame at any given moment.

How strange then to read that these might have never happened, and that Dawsons painting anthology might not have existed in this context to actually be told. Rewind a number of years and this may have indeed been the case, despite early indications suggesting that Dawson was definitely destined to be an artistic winner. Showing much creative promise and visual awareness throughout his childhood and in particular recognized within a school environ, Dawson was actively encouraged by one and all to pursue his dream and realise his aspirations at his first opportunity. This duly came when he gained a place on a foundation art course at fabled seat of uber creative learning, Londons Central St Martins College. A mecca for generations of the gifted and the downright good of all things art. Alumni who have gone on to become household names in their respected creative arenas from interior and fashion design to product and spatial design.

Unfortunately for Dawson, he wasnt prepared to bear his artistic soul in the way requested during the course, and more pertinently to describe at great length as to why he had created what he had (in terms of coursework) and what that work might say to those who viewed it. Dawson felt that every individual who potentially gazed upon his works would arrive at their own conclusions on that specific piece, and that by systematically dissecting and conducting a visual post-mortem on every study translated to his mind as providing a self-justification for the works. This underpinned aspect of the course didnt sit right with Dawson, and although he completed the years study the damage had already been done, and that ultimately he had started questioning the validity of his hitherto love of the subject matter. Once the seeds were inadvertently planted, it was impossible for Dawson to approach his art with the same vim as he had previously, and decided on a complete career-rethink. That re-think was as monumental as could be, as bidding an early farewell to art as a vocation, Dawson instead flung his arms open wide to an alternate career in banking; once hed graduated with a degree in economics that is. For many years Dawson never gave painting a second thought, as he prospered in a financial environment and made his way accordingly. Yet art was going to pop up its jazzy head and bite him on the derriere sooner rather than later.

Dawson had spent a deal of time travelling the world, and immersing himself in other cultures as he plotted his coordinates around the globe. And keen to collate visual memories from everything he did, felt, saw, smelt and generally experienced, Dawson recording each and every element on his camera to pictorially trace his explorations. It turned out to be these seemingly innocent photos that re-awakened Dawsons restless creative spirit, and the processing of which paved the way for the next chapter in his professional life. On returning to his native England, Dawson felt the sudden, overriding urge and compunction to replicate and reimagine this photographic diary of his travels. Finding a great source of excitement and a renewed challenge in life, Dawson whittled away with those original paintings, visually photocopying what hed observed first hand onto a series of blank canvases.

Met with approval from all quarters and reminding Dawson as to the dormant skillset and virtuoso gift hed been afforded from a young age, after a short period of practising and perfecting his newly-rediscovered artistic prowess, he jacked in his job as a banker and began this energized new phase of his very existence as a fully-fledged professional fine artist. 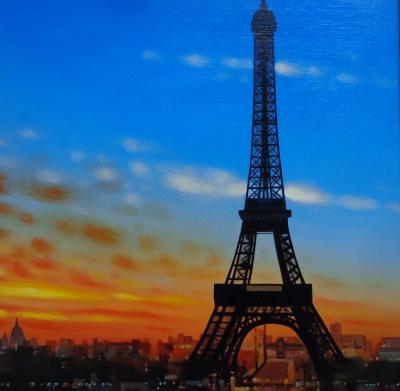 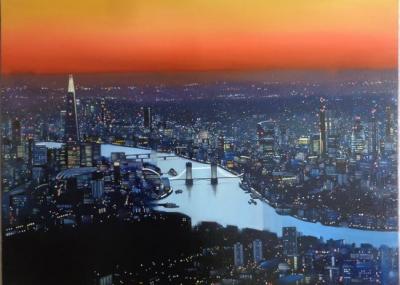