About the Artist Linda Jane Smith

View All Art Works By Linda Jane Smith
Britains supposedly a nation of animal lovers, right, yet in a domestic pet face-off centering on Dog v Cat, we would have though our canine chums would edge it in terms of popularity stakes. But wed seemingly be wrong, as there appears to be far more contemporary artists etching and painting the likeness of felines than there are dog doers. Just an observation. No need to count or alternatively Google it. One such cat lover with a penchant for art is contemporary cat lover/artist, Linda Jane Smith who clearly suffers from cat OCD judging by her body of contemporary cat compositions; which focus on cats, cats and more cats. Although often disguised by the positioning of furniture in her paintings (shes not kidding anyone).

Smith struggles to recall anything else from her childhood other than drawing. And probably cats, and as a youngster would draw constantly, stopping only to attend school and eat her tea. Probably.

And when Smith wasnt drawing, shed be entering her drawings in as many art competitions as she could. Needless to say as soon as Smith left school she hot-footed it to Birminghams Bournville College of Art to study drawing. Well, Graphic Design as it happened. During her happy student days, Smith gained the ability to work very precisely and tightly, while also learning to paint on the hoof if she needed to. College helped Smith evolve and eventually hone her creative talents and channel it into the artistic and stylistic direction which she was aiming for.

Smiths specific brand of contemporary art has progressed still further since graduating from art school and now she effortlessly (yet employing a LOT of effort in the due process, obviously) fuses the two great loves in her life together, perfectly. Thats cats and painting for those who havent been following properly. Ahh yes, cats. Didnt think wed mentioned those. You see theres always been cats figuring somewhere in the life of Smith thus far. And not just cat(s) singular. Often whole families of them. Always providing a rich and constant seam of inspiration as you can see for yourself. Today, Smiths tortoiseshell cat, Jessie routinely pops into her studio for a *chat before going back to bed.

Its no surprise that highly elaborate illustrative practitioners such as Arthur Rackham and Nicola Bailey fascinated a young (and now, not as young) Smith when she first became interested in graphic illustration and design. Both very visual champions of the proffering of exquisite and intense detailing in their hallmark works, Smiths cat-themed pictorial pursuits follow the same pattern. As an artist, Smith herself speaks of the sheer joy and repeated pleasure of being able to revisit a favourite painting and seeing something new on each occasion. Citing such delicate and previously masked embellishments like a ladybird, leaf, mouse or bead for instance. Gauging the opinion of children and adults whos eye have fallen prey to her cat pieces, Smith concurs that her fundamental beliefs ring true.

Being an avid collector/borderline hoarder of all kinds of wonderful past and present, including hat pins, china and fabrics, Smith fervently believes that these personal and unique treasures should be illustratively realised and pictorially celebrated in her own paintings. And by juxtapositioning a well-fingered Beano comic next to a cat sat on a faded Persian rug will, Smith hopes, conjure up all manner of pleasant and uplifting childhood memory for those looking out upon it. Regressive art therapy almost. And as you can tell already, witty observations and good old fashioned humour and whimsy also play larger than life parts in Smiths work

In terms of materials used, Smith frequents designer gouache, rendering it in something akin to a Pointillist style of administration. However the detailed drawing forms the base layer and habitual starting point, and only when thats established does Smith start on the meticulous projection of the painted dots; slowly constructing the layers of colour to ensure its overall form and texture. Typical hues and saturations are lavish and of conveying a certain degree of depth and graphical decadence; rich, faded carpets, velvet cushions and threadbare brocades are abound.

Having showcased her work to date extensively throughout the length and breadth of the UK, Smith has collaborated with leading fine art publishers, Washington Green, the result of which has seen limited edition print reproductions of her signature pieces flying off art gallery shelves, both here in Britain and across the pond in America. Consequently some of Smiths early version, such as The Wedding Breakfast and Down the Pan have become extremely collectable of late, whilst each new release is highly anticipated on both sides of the Atlantic. 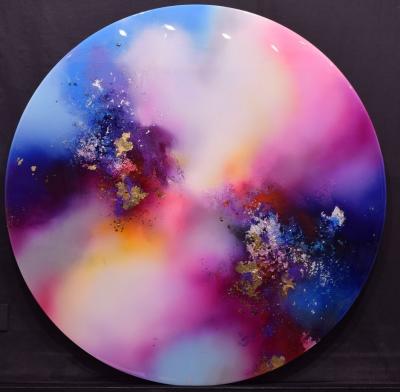 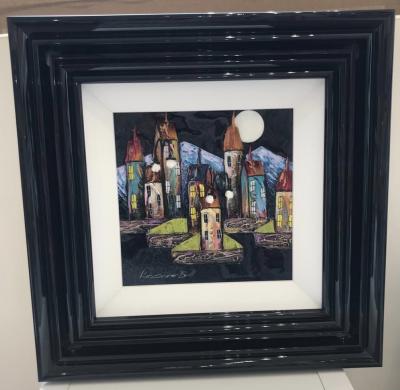 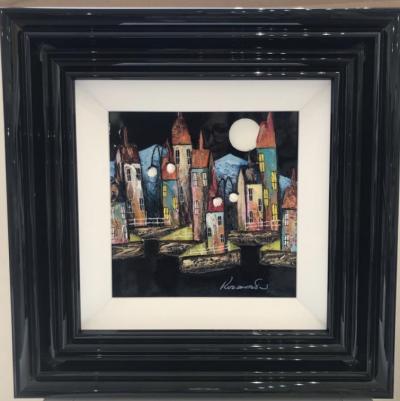