About the Artist Gordon King

View All Art Works By Gordon King
As is often the case with successful and long-established artists practising professionally today, critically acclaimed contemporary figurative artist, Gordon King thrived at art during his childhood; in fact, he excelled so much that he gained a place at Reading Universitys Art School to study Life Drawing with ease at that particular juncture in his further educational career. On completion of that course, King went on to train as a figurative illustrator at Londons prestigious, Carlton Studios right up until National Service meant a break in his continued creative education. Although in reality this was not to be the case, as King instead became a Draughtsman in the Royal Signals and was stationed in (of all places) Paris during this period. Which essentially afforded King unprecedented access to  and inspiration-drawing from  a city which artists of all genres have flocked to throughout generations.

Once King had got his National Service under his belt, the aspiring fine artist dedicated the following years to working as a freelance illustrator, whereby he landed roles originating artwork for national magazines and book titles, alongside of fulfilling illustrative commercial briefs for advertising agencies throughout this successful chapter in his life. Whats more, King also began completing portrait commissions for clients at this time. In 1971  and on the back of the accumulation of much personal material  King presented himself as a bona-fida figurative artist as such at his debut sole show, which was opened by the late TV and film actor, Sid James. Thanks to the considerable measure of success and consequent buzz around his work that his first one-man exhibition created, King subsequently had his body of work showcased at both the Royal Academy Summer Exhibition and the Royal Institute of Painters in Water Colour.

This juncture proved without doubt to be the catalyst for King, and the making of him as a professional artist, as from this launch pad he went on enjoy levels of greatness he himself never believed possible. Amongst those finest illustrative hours of which there were countless inclusions, King witnessed his My Fair Lady painting become his first best-selling print, nationally on being published back in 1983, whilst a catalogue of other reproductions followed suit over the past three decades and countless one-man shows afforded King further priceless shop windows in which to convey his artistic talent.

To help celebrate his 60th birthday in 1999, and to acknowledge his enduring popularity in his genre, Kings second book on the subject of figurative art was published, entitled Drawn to Life; which also featured prominent pieces from his exhibition at the Halcyon Gallery in Birmingham that same year. In the same 12 months, King was also adjudged to be the Fine Art Trade Guilds Published Artists of the Year, while also having one of his paintings accepted into the Singer & Friedlander Sunday Times Watercolour Competition. Elsewhere, and King has regularly involved himself in charitable projects based around his art, and has routinely worked with Save the Children. In light of his achievements in this field, HRH The Princess Royal (the Societys long-standing patron) penned the forward in Kings first published title, A Romance with Art no less. At the same time King has given his time freely for the BBCs annual Children in Need appeal, handed a portrait of Sir Norman Wisdom to the Black Watch cruise ship on behalf of the RNLI and been responsible for three limited editions of Darcey Bussell in aid of the Alzheimers Society.

In terms of Kings influences, he readily admits to having been inspired by figurative painting for as long as he cares to remember, with the human form being his main artistic motivator. To Kings mind, the delight in producing such a likeness of someone in the medium of paint continues to excite him and in some ways complete him as a creative individual, and in his own words adds; Putting something of me in as well, or the thought that if I flicked my fingers the painting could come to life takes his unbridled passion for the subject to yet another level. King considers himself to be something of what he refers to as a sentimentalist, whereby romance, happiness and emotion are fused in a large percentage of his paintings, whether the finished article is either a seemingly simplistic and stripped back studio-sat pose or the glamour of a Venetian society gathering. Or by that very same token, race-goers at Ascot, picnickers at Henley Regatta or the heightened, fluid movements of a dancer at the Royal Ballet.

King speaks candidly of always been on the lookout for that something special to pique his initial interest in a given and potential muse, be it the way in which natural light casts itself across a face, a specific look or feature, the shadows bouncing across a floor, the texture of fabric or the sensuous feel of silk. The respected artist also converses at will with regards to the effect sea has on selected paintings hes manifest down the years, and his love affair with the sea and its transient hues and saturations and ebb and flow; something which hes been acutely aware of in the context of his capture of women in his pictures. King lends credence to this by explaining; My paintings of girls have seen me up to my knees in water capturing the waves around a figure walking in the sea or on wet sand trying to get in just the right position to see the mirrored reflection on the beach. And if its not water providing King with the perfect backdrop to his pieces, then he has the garden to thanks for furnishing his signature canvases with interesting props when attempting to convey his figurative work in evocative environs, citing a fascination with old wheels and statues, pots and flower baskets, garden gates and old apple trees key to characterizing his paintings, historically. 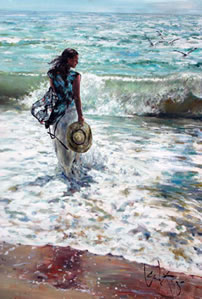 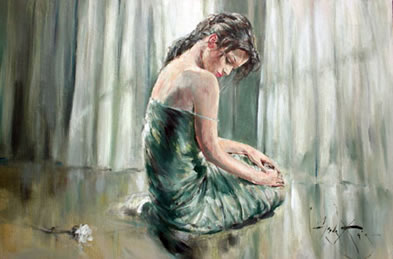 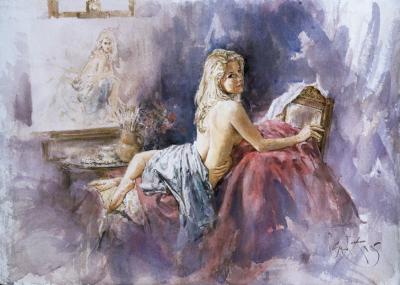