About the Artist Joanne Panayi

View All Art Works By Joanne Panayi
Inspired contemporary sculpture artist specialising in figurative work is a heck of a title in anyones book, so instead we give you, Joanne Panayi. i.e., the aforementioned creative. Being a female (artist) it goes without saying that shoes hold a certain and recurrent fascination to Panayi. For fascination please read, obsession. An un-negotiable fact which is ceramically attested to in her predominantly nude female figurative sculptures which place the greatest visual emphasis firmly on the shoes. Variably reclining on a chair, perched provocatively on a bar stool, relaxing in a bath tub or legs akimbo on a chaise long, Panayis seemingly seductive, shoe-fetishing characters have been arranged in a selection of humourous/coquettish poses since she started; with one of our favourites being the Christine Keeler-esque chair straddling sculpture. The exaggerated legs/feet/shoes axis of sculptured pleasure is completely at odds with the remainder of the piece in Panayis typical works, with the torsos, arms and bald heads being fairly non-descript and wholly disproportionate to the lower half of the body.

Which is both strange and cool simultaneously to our mind.

But more about the artist herself. Born in Newcastle under Lyme, a mere bus ride from Stoke on Trent in Englands glorious Potteries region (the Midland-ish to the unfamiliar) in 1970, Panayis initial forays into art where made possible by the introduction of pencil to paper, as well as felt tip pens. For anyone growing up in the 1970s, a must have means of creative expression. Or just colourful scribbling purposes. Panayi wiled away her childhood hours drawing cats and designing new dresses for Cinderella, and mastered her felt tips with consummate ease. During her adolescence, Panayis increasing interest in art and awareness and exposure to some of the art worlds greatest exponents led her to the likes of L.S Lowry and Beryl Cook; the latter we would say having a clear influence on the work we recognise today. Panayi recalls her local art shop in Newcastle became a popular hang out during this period and in her eyes was a magical place to spend time.

Aside from felt tip pens, the 1970s was also good to music, and Panayi was a huge fan of both Gilbert & Sullivan and an inconsequential group found on the periphery of popular music back then going by the instantly forgettable name of ABBA. And like any teenager, Panayi would belt out famous tunes of their whilst gripping anything close to hand that vaguely resembled a microphone, whilst dreaming that one day shed have a figure like 50% of the female contingent who made up ABBAs number, Agnetha.

Sadly all this sunniness and formative years frivolity came to a crashing and premature end when Panayis mother suddenly passed away. Reeling from this massive and unforeseen blow, Panayi threw herself into any jobs once shed completed secondary school, including spells at McDonaldss and a succession of bar jobs before she finally settled on sign writing as a potential career to pursue. And in 1994 Panayi packed up her troubles and brushes and left the UK far behind her as she jetted off to a new life in Cyprus. She worked there in the guise of a freelance artist, and undertook numerous briefs; employing the mantra of small enough to care, big enough to cope, etc., judging by the wealth of diverse projects she fulfilled in this role. Everything from traditional signs to large scale murals to commercial art installations to portraits. Whats more Panayi soaked up the social life out in Cyprus, where she would engage in one of her favourite pastimes (which we all like to dabble in from time to time), people-watching.

Eventually  and some 8 years later  Panayi returned to Blighty, with a view to taking her art more seriously and targeted. Deciding that the best way to achieve this was to go to college to further her art and design education as such, Panayi spent two years attending Stoke on Trent College, before going on to Staffordshire University where she studied for a Degree in 3D Design Craft. Naturally enough, this resulted in Panayis work taking an un-prescribed third dimensional look and feel to it, and it was at this precise juncture that her now signature multi-media sculptures began to take initial shape, evolve and develop into what theyve become today. With her head firmly screwed on, Panayi approached the universitys EFS scheme so as to obtain a business grant, which essentially allowed her to set up her own business, while also providing some much needed, on-tap business advice.

It wasnt always ceramics though which piqued Panayis sculpting interest, as shes previously frequented a variety of mixed media, including fine metals and applying silver-smithing techniques; which brought her plaudits from the outset. Panayi is proud of her brace of awards from Goldsmiths in relation to her design skills and the traditional techniques and practice she actuated when originating and constructing some of her first silver-wear examples. Having said that, the pieces which have in fairness brought Panayi more to the general publics attentions in recent times is of course her female figurines which are discovered at the core of her much acclaimed, New Shoes range as described at the top. Speaking of just how well this new direction was received, Panayi says; After the excitement of my first magazine and newspaper articles, my New Shoes sculpture range won an award from GWIIN, the Global Womens Innovators and Inventors Network, adding; And I started the exciting journey to take my beautiful ladies and their gorgeous shoes from my work bench to gallery. 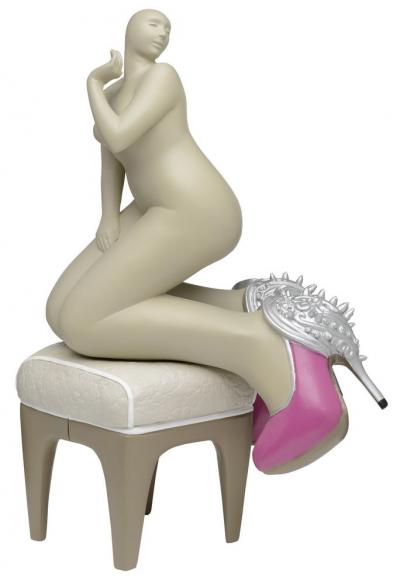 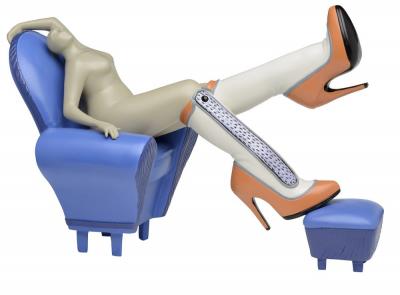