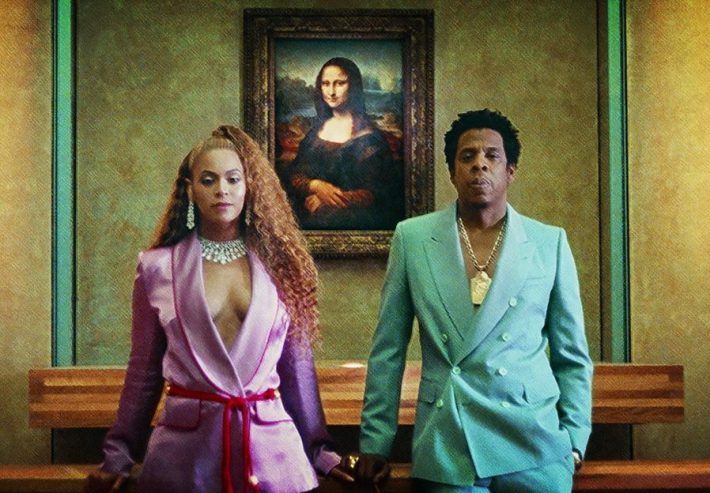 In recent months, universally celebrated pop royalty, Beyonce and Jay-Z privately hired a section of Paris’ famous Louvre art gallery, unbeknownst to the wider world. Until now that is, as it emerges that the music world’s numero uno power couple were afforded VIP treatment by the management of one of France’s most visited tourist attractions, so that the Carters could shoot their latest video.

The very fact that Queen Bey and her hubby, Jay-Z could pull of this event in secret is quite astonishing, given the volume of interest/paparazzi which/who follow their every move. But keep it under their collective hats they did, as the iconic couple made the video to accompany their latest single; and which features cameos by the contemporary art likes of ‘David, Géricault’ and ‘Da Vinci’ himself!

Hot on the heels of dropping their surprise new album which caught everyone  napping, entitled ‘Everything is Love’ (which, according to music critics, landed straight out of nowhere), comes the release of the Louvre-shot video. Visual back-up to the track, ‘Apes__t’, it’s a complete mystery that Beyonce and Jay-Z managed to keep the filming under wraps at all, given that some 8.1 million visitors poured through the doors of the Louvre last year; officially making it one of the most frequented museums on the planet.

Beyonce and Jay-Z themselves are certainly no strangers to the Louvre, having visited it four times during the past decade. But explaining just why they agreed to the request to make the music video in their prestigious venue this time around, the Louvre’s powerbrokers insisted that; “The deadlines were very tight but the Louvre was quickly convinced because the synopsis showed a real attachment to the museum and its beloved artworks.” A spokesperson also revealed that the Carters using the museum to create their video was not an isolated incident, and that annually 500 films are given the green light to be originated there.

If you yourselves want an access all areas art gallery which – whilst not containing the odd da Vinci or Van Gogh, sadly, – showcases the very latest works from some of the UK’s foremost contemporary artists, then you should head for Chelmer this summer. Take your pick from any number of hugely successful pop stars-turned fine artists, whose brand new pictorial releases are routinely handled by ourselves, including the likes of Bob Dylan, Ronnie Wood and Jimi Hendrix.