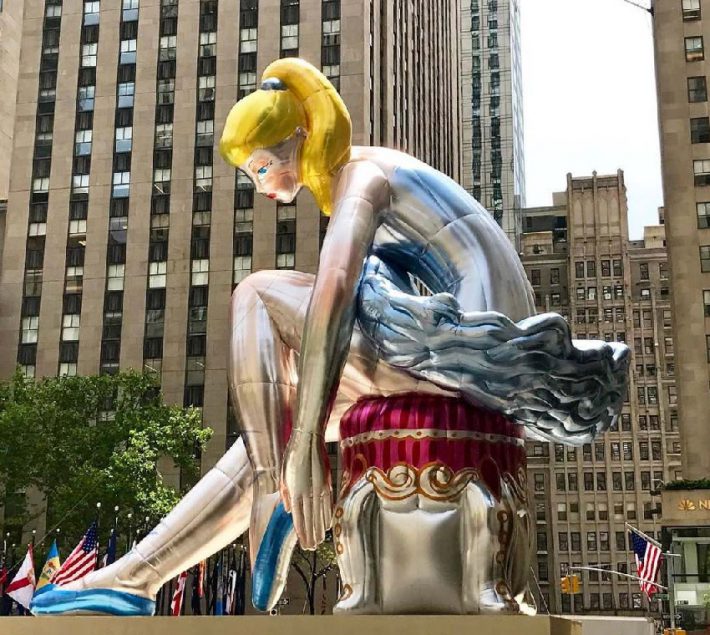 Seldom do UK contemporary art lovers get to see one of the compositional discipline’s favourite sons on familiar soil, yet all that’s about to change in 2019 as Britain prepares to welcome a rare exhibition by art superstar, Jeff Koons.

Normally as elusive as Lord Lucan and Shergar put together, previously the chances of finding yourself up close and personal to Koons’ seminal works (or any of his slightly less seminal works for that matter) were virtually non-existent. However that’s all about to change, and now – thanks to the most unlikely of sources – those of us who love Koons’ back catalogue have another reason to look forward to next year.

The source in question is a gathering of Oxford students, as opposed to any fine art curators, and in particular those who number the academic institution’s Edgar Wind Society for Art History. As it’s their members who have coaxed the American Pop Art pioneer to host a major show at the university’s Ashmolean Museum; itself recognised as the world’s oldest public museum.

Set to be staged from the 7th February to the 9th of June next year, ‘Jeff Koons at the Ashmolean’ (as it appears to have been dubbed at this juncture) will showcase works created by the iconic contemporary artist, most of which will have never before been seen here in the UK. These will number 17 works in total, 14 of which are being given their UK debuts, and among the inclusions confirmed are ‘Seated Ballerina’, a 2-metre high mirror-polished stainless sculpture and the 2.6-metre high Balloon Venus (entitled, Magenta).

As to just how this recent announcement came to be, the most qualified person to explain is perhaps the museum’s Director, Alexander Sturgis. It was he who first told www.guardian.co.uk that Oxford students were instrumental in making the forthcoming exhibition happen, courtesy of the Edgar Wind Society inaugurating a contemporary art prize; and subsequently declaring the debut winner as none other than Jeff Koons himself.

And so that Koons could accept this honour bestowed upon him, members took it upon themselves to (rather ambitiously) invite he who has habitually hit a rich form for reproducing otherwise banal objects in reaction-provoking alternative lights to the dreaming spires to collect his award. Which to their surprise, he accepted.  What happened next was relatively textbook to those who have spent time following Koons’ successful contemporary art career over the years, yet to those in the dark, the following series of events took place.

Apparently Koons jumped on a plane, and “flew to Oxford for the day, accepted the prize, spoke to the students, was incredibly giving of his time and incredibly gracious in every respect and then flew back to New York that same night,” Sturgis told The Guardian. As you do. Although in fairness we couldn’t imagine some artists of his global status dropping everything to appease a bunch of students on the other side of the Atlantic Ocean.

The upshot of this trip was that Koons agreed to put on a mini-retrospective which would feature examples of his most acknowledged illustrative pieces, the plans of which have now been rubber-stamped by all parties concerned.

So why many of you might ask, have UK-based contemporary art fans had to wait so long for such an exhibition to get the green light in the first place. The answer it would seem might have something to do with Koons’ reputation for often upsetting the more reserved and staid of the art establishment on this side of ‘the pond’; some of whom have often viewed the Pennsylvanian’s celebrated works with suspicion, while anticipating some element of risk factor.

The last time a Koons retrospective was staged, the venue was New York’s Whitney Museum back in 2014, an exhibition which then went on the road and pitched up in both Paris and Bilbao thereafter. Yet public galleries in Britain have predominantly shied away from potential controversy-courting, save for London’s Serpentine gallery, which in 2009 presented Koons’ works for public delectation.

Envelope-pushing Koons has always challenged contemporary art fans to see the often mundane items from a different perspective and make us really think as to what art is. Opinion remains divided amongst fine art critics about where Koons’ work stands in the grander visual scheme of things, with sizeable casts of balloon animals or blue bauble ‘enhanced’ reimagining of existing masterpieces provoking much debate on both sides of the divide. Yet for all the pontificating Koons’ work traditionally changes hands at auction for significant prices.

Of course, Pop Art practitioners can take all guises, with many of those on our books having freely cited Jeff Koons as a creative influence on their own compositional collections and careers to date. Take a closer look at the works of the likes of Lhouette, Stuart McAlpine Miller, Sarah Holmes, Hue Folk and JJ Adams for subtle echoes of Koons’ style, and popular cultural references as a broader picture. All of whose very latest limited edition releases you can enquire about here and now.