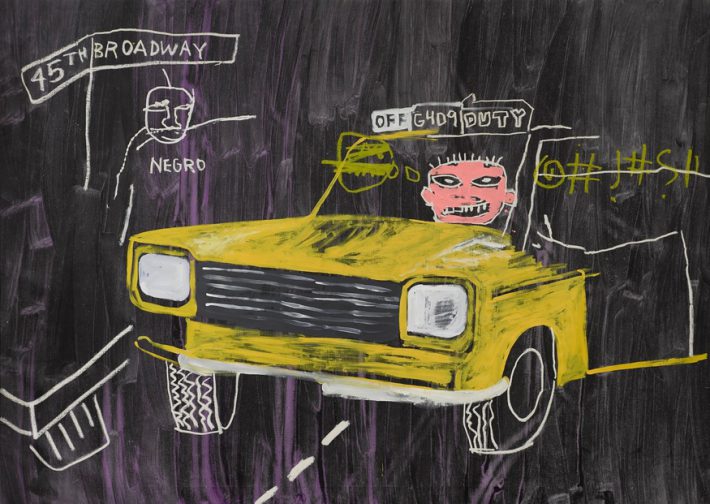 What happens when two iconic contemporary artists (both of whom are no longer with us, yet whose individual and collective legacies will compositionally play out for ever more), decide to collaborate on a piece? We’ll tell you what happens. The visual equivalent of a rap off or dance off happens. Think along the lines of 1997’s Run DMC v Jason Nevins music video which accompanied the single, ‘It’s Like That’; only swap heavy layers of old skool hip-hop beats and slick modern rapping for the opposing graphic styles indicative of a Pop Art icon and a new kid on the graffiti art block.

And step forward Andy Warhol and Jean-Michel Basquiat. Who faced up to one another back in 1984-1985 for the greater good of contemporary art. The pictorially resultant ‘Taxi, 45th/Broadway’ has just sold at auction in New York for the sum of $9.4 million, having been surrendered by the estate of another late, great creative type; namely fashion designer, Gianni Versace. Versace himself had previously acquired the painting from New York’s Gagosian Gallery in 1996, and had remained in his private collection until now.

Initially Estimated to Fetch Between $6 – $8 Million, In the Event Exceeding Expectations

So, with provenance out of the way, you’ll now want to know what the big deal is about Basquiat/Warhol’s unique ‘Taxi, 45th/Broadway’ iteration, to which we’d tell you; pretty much everything. In terms of design language, art critics generally believe that abstract expressionism just about covers it, yet the stark contrast between the two protagonist’s styles is never found far from the surface. For Basquiat we’re talking about a more textured, oil-stick draughtsmanship (as auction house, Sotheby’s themselves describe it), whilst when referring to Warhol’s illustrative input it’s all about that flat, graphically-influenced imagery. Which, although on paper might not, necessarily work; it’s clear to see that on canvas, the opposite is true.

In the midst of ‘Taxi, 45th/Broadway’ there’s something of an artistic synthesis keenly observed, with each possibly wanting to out-do the other to a certain degree; yet always in an overarching context of mutual admiration and respect. Friend, Keith Haring hit the nail on the head when he described what he saw as; “a physical conversation happening in paint instead of words”. And goes on to cite that every interaction between the two contemporary artists – from the witty asides and caustic remarks to more profound realizations and elementary chit-chat – took place with paint and brushes.

But just how did this joining of painterly forces of such seemingly polar opposites come to bear from the outset?

According to sources, Basquiat and Warhol were first introduced to each other in 1982, at a time when the former was an emerging creative talent with the art world at his feet (albeit in the capacity of a raw graffiti street artist), while conversely Warhol was a past master with a reputation which went before him. Those close to both parties suggested that both witnessed facets in the other which appealed to them, and believed that an alliance of this nature would allow them to extract that something sought. For Basquiat’s ends he craved the fame and recognition that an association with Warhol would doubtless bring with it, and from Warhol’s perspective it was all about seeking fresh innovation and a revitalised energy that only a much hyped, up-and-coming exponent could instil.

Getting under the actual skin of ‘Taxi, 45th/Broadway’, and some art critics have concluded that what they see is something akin to a double portrait of the two practitioners of their crafts. Implying that the black figure represents Basquiat, with the taxi driver clearly a rendition of Warhol if the viewer notes the ‘frenetic eyes and wiry hair’.

If you like your contemporary art presented in a more off-the-cuff visual manner (with hints of graffiti and Pop Art aplenty) similar in tone to ‘Taxi, 45th/Broadway’, then we’re confident you’ll just love some of the very latest works of the fine artists we supply via both our galleries and online sites. For example the hugely popular and collectable likes of John Wilson, Zombiedan, Temper, Stuart McAlpine Miller and Opake One.