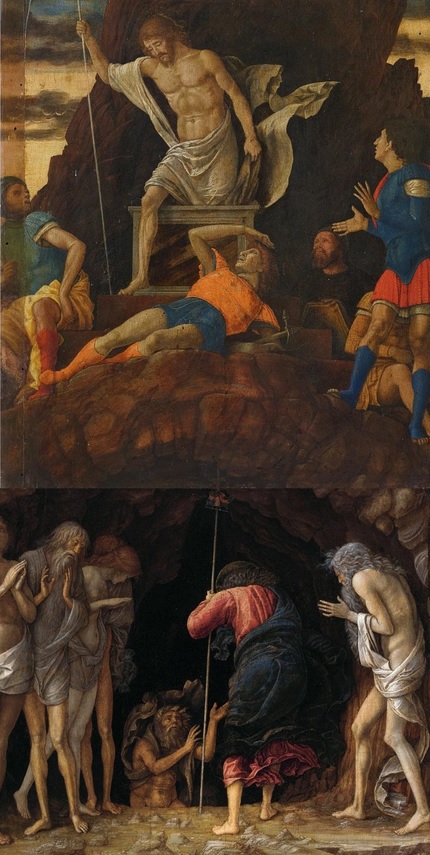 The best things in life tend to come in twos when you think about it. Renee and Renato. Bonnie and Clyde. The Two Ronnies. Rod Hull and Emu. Zig and Zag. The Cheeky Girls. OK, instantly forget about that last one. Which is why it was always imperative that the two halves of a painting which is largely considered to have been a Renaissance masterpiece would eventually reform as a compositional double act, sooner or later.

And now, some 500-odd years later, London’s National Gallery officially hosts the long overdue coming together of one of the fine art world’s most enduring partnerships. Despite the sum parts being separated for centuries.

The painting in question is, namely, ‘The Resurrection of Christ’. Or rather the top half is, and as originally created by one Andrea Mantegna. While the bottom half, if you like, has been living a separate life under the (not quite as optimistically entitled) name of ‘The Descent of Christ into Limbo’ during the intervening 500-odd years.

Staggeringly, contemporary art experts only recently clocked that the upper section might be attributed to Mantegna, having observed a small mark which they believed illustratively implied that it was not a standalone piece. And that, essentially, it was part and parcel of a much bigger picture. That much bigger picture being the jauntily-titled, ‘The Descent of Christ into Limbo’, to which it was eventually connected.

To Accidentally Paraphrase the Spice Girls; When Two Become One

To date (or at least, from the 19th Century onwards), the upper part of Mantegna’s visual feast had been showcased in situ at Bergamo’s Accademia Carrara gallery in northern Italy. Conversely the lower half had been in the possession of a private collector, who has now loaned their 50% of art history to the joint cause at the National Gallery.

In terms of when the collective piece was first painted, and experts understand that it was around 1492, with the panels originated for a chapel located within the grounds of a castle in Mantua; itself geographically discovered in the north of Italy. And moreover, where Mantegna was employed by the then powerful Gonzaga dynasty in the role of court painter.

Attempting to shed light as to just why the sum parts had come to be separated in the first place, and we’re told that it was common practice back then to split up works of art as and when they were moved from place to place for logistical reasoning.

We ourselves are no strangers to multifaceted works of contemporary art, albeit ones which aren’t necessarily estranged from an integral part of its own pictorial foundations and don’t come as two for one deals. Yet have been created by two contributing artists, at the end of the day. And we routinely play host to the very latest limited edition releases from such best-selling contemporary art exponents. Like for example co-collaborators, Chris and Steve Rocks, husband and wife team, Peter and Jayne Smith and (if we’re talking bizarre duos), the late, great broadcaster, Sir Terry Wogan and MAC.