It’s not every day that contemporary art fans here in (selected) towns and cities across the UK come within touching distance of an original Da Vinci. Not that they’ll be allowed to physically make contact with said works from the master, and is merely implied as a turn of the vernacular. However that’s all about to change (at least for a while later this spring, and again; in as much as seeing, rather than actually touching), as a staggering 144 of the fabled Renaissance artist’s sketches will be brought to the (more general) public’s attentions. And specifically, those who reside outside of London for a change.

To mark the 500th anniversary of Leonardo da Vinci’s death, The Royal Collection Trust will be loaning out a dozen to various institutions located in key parts of the British Isles; with this roadshow to end all roadshows kicking off in Birmingham in February. And the second city’s eponymous Museum & Art Gallery is just one of the venues where contemporary art-loving folk will be able to witness this special, one-off event. Forming part of 12 simultaneous exhibitions elsewhere, according to the arts and culture pages of the www.birminghammail.co.uk website of late, this nationwide event will be entitled, ‘Leonardo da Vinci: A Life in Drawing’. And aside from Birmingham, the highly-anticipated exhibition will also pitch up in the following locations between February 1st and May 6th 2019;

And a further location to be announced….. 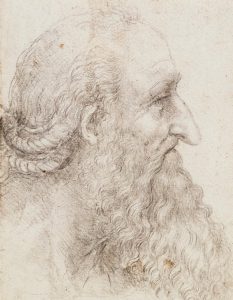 Focusing on Da Vinci’s foremost interests and illustrative inspirations, the individual exhibitions will serve to pictorially showcase the iconic painter’s diverse range of influences. Through the medium of his drawings, these are set to envelop painting, sculpture, architecture, music, mathematics, anatomy, engineering, cartography, geology and botany.

These never-been-seen-before pieces are destined to afford the widest-ever audience of art lovers a rare glimpse into Da Vinci’s creative life and times, and will include such famous examples of the Italian’s craft as the ‘Head of an Old Bearded Man (c.1517-18)’, and ‘A Map of the Valdichiana (c.1503-4)’, amongst other exhibits.

The majority of Da Vinci’s most revered and critically acclaimed of achievements, remain his sketches, as despite being a celebrated and moreover, respected sculptor, architect, military and civil engineer and anatomist, hardly any evidence of his alternate careers have survived the intervening centuries. And even in terms of his paintings, only 20 of these were ever presented as completed works.

Once the exhibitions hosted by all The Royal Collection Trust’s partner venues have run their causes in May, the separate sketches will come together at the Queen’s Gallery in Buckingham Palace, in the guise of 200 plus sheets; culminating in the largest exhibition of Da Vinci’s back catalogue in the one location in some 65 years.

If however, you’re looking to discover contemporary art which is accessed on a more permanent basis (although admittedly – and with respect to the fine art exponents behind them – a little less rarer), then we have our own much-envied collection of both originals and limited edition new releases available right here, and right now. Brought to you in association with a raft of the UK’s most-admired contemporary fine art practitioners, including Henderson Cisz, Mark Davies, Andrei Protsouk, Danielle O’Connor Akiyama and Kerry Darlington.