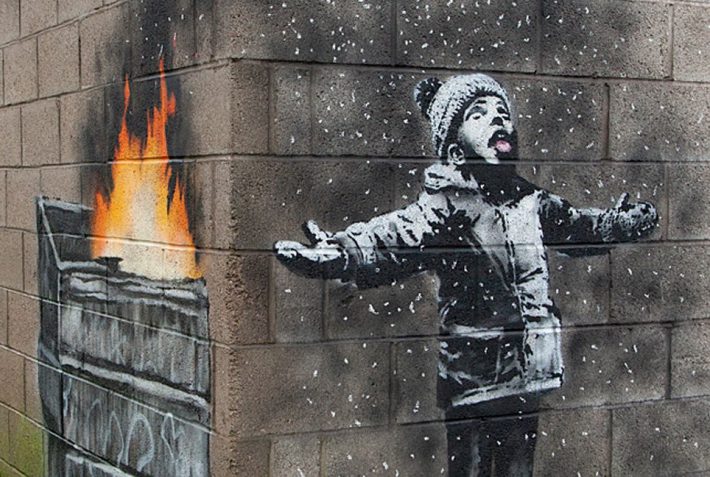 Who doesn’t love a story with a happy ending, right? Throw in a bit of politics, an otherwise unassuming garage wall, industrial pollution, an Essex-based art gallery owner and the hopes of a South Wales community, and we’re obviously talking about the most recent tale with a distinctly Banksy theme.

A critically acclaimed contemporary artist who certainly knows how to grab the headlines over the years, the anonymous Bristol-based, stencil-packing graffiti exponent has stuck again, like a modern day Robin Hood. In as much as he (hypothetically) takes from the (perceived) rich to give to the poor(er).

In this particular well-documented instance, the former being a seemingly benevolent collector of Banksy’s works who’s no stranger to forking out six figure sums to acquire his works (walls and all). While the latter being the good people of Port Talbot, who have been given assurances by its new owner that the piece will remain in the South Wales community for at least 2 years, if not longer, as the once-industrial town’s very latest tourist attraction.

Not only that, but new owner (of both art and garage), John Brandler has duly informed the local council that he also intends to exhibit his other half a dozen or so original Banksy installations in the town too; in a bid to drum up more reasons to visit Port Talbot during the coming months.

The previous owner of the Banksy – Ian Lewis – told www.bbc.co.uk/news that the sale of ‘Season’s Greetings’ going through was certainly a ‘weight off his shoulders’; having being somewhat reluctantly thrust into a media spotlight ever since the Bristolian’s most recent handiwork suddenly appeared on the side of his garage without any prior warning whatsoever. Which tends to be Banksy’s signature flourish. He was also worried that the longer it remained in situ, the more chance that it might be vulnerable to vandals looking for notoriety.

Initially observing the image of what first appears to be a child revelling in snow fall (yet on further scrutiny sees the snow actually being ash emitted from a fire on the other wall) on two sides of his hitherto unremarkable garage just a week before Christmas, Lewis went on to describe the discovery as ‘life changing’. In terms of his own plans from this point on, the steelworker explained how he intends to plough some of his unexpected windfall back into building a new garage to replace the one which will now be demolished brick-by-brick; and to be re-constructed at an as yet un-named venue in Port Talbot’s town centre.

To date some 20,000-plus contemporary art lovers have witnessed the garage Lewis’ built himself back in the 1990s (so as to protect his car), however once it’s relocated to its future home from home, that visitor number is set to increase dramatically.

Speaking about Essex-based contemporary art gallery owners, we ourselves are huge fans of Banksy’s iconic works of graffiti art. Yet unfortunately are neither in the business of acquiring original pieces nor finding that the spray can specialist has crafted something potentially provocative on the walls of our premises. Having said that, we ARE in the business of providing both brand new originals and the very latest limited edition compositions from a variety of hugely popular contemporary fine art practitioners. A list which reads like a who’s who of the UK’s most prominent graffiti artists, such as Temper, Zombiedan, Stuart McAlpine Miller and Lhouette to cite but four.