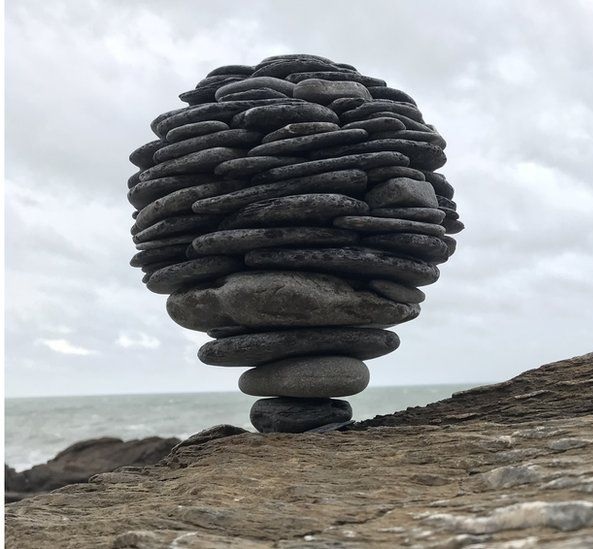 Most of us have at one time or another created what we believe to be a ‘work of art’ on a beach. More often than not as a means of declaring our undying love for someone special. And before that particular scenario would play out, our earlier years would see us trying our hand at entry-level contemporary sand sculptures; despite nearly all our efforts being suspiciously castle-like in inspiration and construct.

Well, fast forward to 2019, and someone else has been perfecting contemporary beach art which they know for sure will only remain in situ for a limited number of hours; as both time and tide waits for no man, as the proverb constantly reminds us. The man/innovative contemporary sculpture artist we speak of on this occasion is Sam Bennett; who has been in conversation with www.bbc.co.uk with of late, discussing his novel – if transient – approach to his chosen genre.

While his CV might have him down as a landscape gardener, Bennett has achieved his local celebrity status by way of his unique and captivating sand-based endeavours, rather than soil. That being said, it’s stones – or rather, fairly sizeable rocks by all accounts – and driftwood which are his preferred mediums, along with any other raw materials he discovers on the beaches of his native Devon. 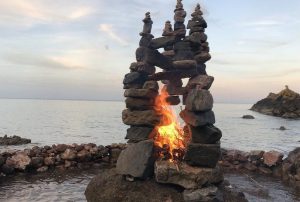 Tide to the Job

Bennett told the Beeb’s website how he first began creating sculptures over a decade ago, when barely a teenager. Undistracted by the presence of an X-box or any other trappings of adolescent life and times, a then 12-year old Bennett professed to having always been more at home, outdoors. He also readily cites British contemporary art sculptor, Andy Goldsworthy as an inspirational figure, who helped fashion what might otherwise have been a flash in the pan interest to a full-blow labour of love during the intervening years.

Bennett’s fascination with the natural world around him – as opposed to a more virtual one – grew, and his formative years saw him (in his own words) becoming; “infatuated by making a living from nature”. He added; “Even when I was doing exams at school I still wanted to go to the beach and build something.”

Now 26, Bennett has gone a long way to realising that youthful ambition, especially perhaps now that his creative works have gone that most modern of ways, namely viral. Perversely the internet has brought what he loves doing to the attentions of people who wouldn’t otherwise be aware, but that goes with the territory today. As does the underlying fact that like taxes and death, the turning of the tides are unavoidable. And with each one, his latest contemporary sculpture will disappear. 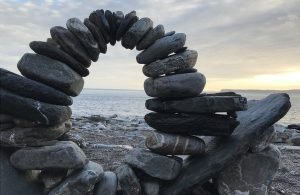 “I read the news and there’s a lot of pain in the world. If I did not do what I do it would all get too much for me”

“It’s there for a moment and gone the next, I’m just moving nature around,” says Bennett, going on to add; “There’s an element of excitement about seeing the tide coming in and in a couple of hours it has been destroyed.” He simply describes this process as ephemeral nature, and explains that this element underpins just why he does what he does in the first place.  In terms of who witnesses what, when and where, Bennett admits to harnessing the powers of the online world to share his artistic creations, routinely posting his handiwork on Instagram.

Of course, the majority of the backdrops selected for his sculptures are the more remote of beaches found within striking distance of Torquay, so from a health and safety perspective pose little threat to the general public; and more especially kids, who may be tempted to clamber on some of Bennett’s more imposing structural pieces. But just to be on the safe side he topples his own sculpted work irrespective of tide times, should his vision have been brought to fruition on a popular beach.

As far as Bennett is concerned, he merely wishes to spread a little joy during these stressful, unsure times we’re all living through, and sums up his driving force and creative ethos perfectly by saying; “We live in a world that we are destroying, and if I can add something beautiful even for five minutes it brings happiness to people.”

Bennett is not the only contemporary artist living and working here in the UK who claims to be perpetually influenced by the call of the coast, and at Chelmer we work with a number of diverse, and best-selling exponents of their fine art genres. Amongst those we’re talking about the critically-acclaimed likes of Rebecca Lardner, Lawrence Coulson, Ben Jeffery, Philip Gray, Tom Butler and Debra Stroud.